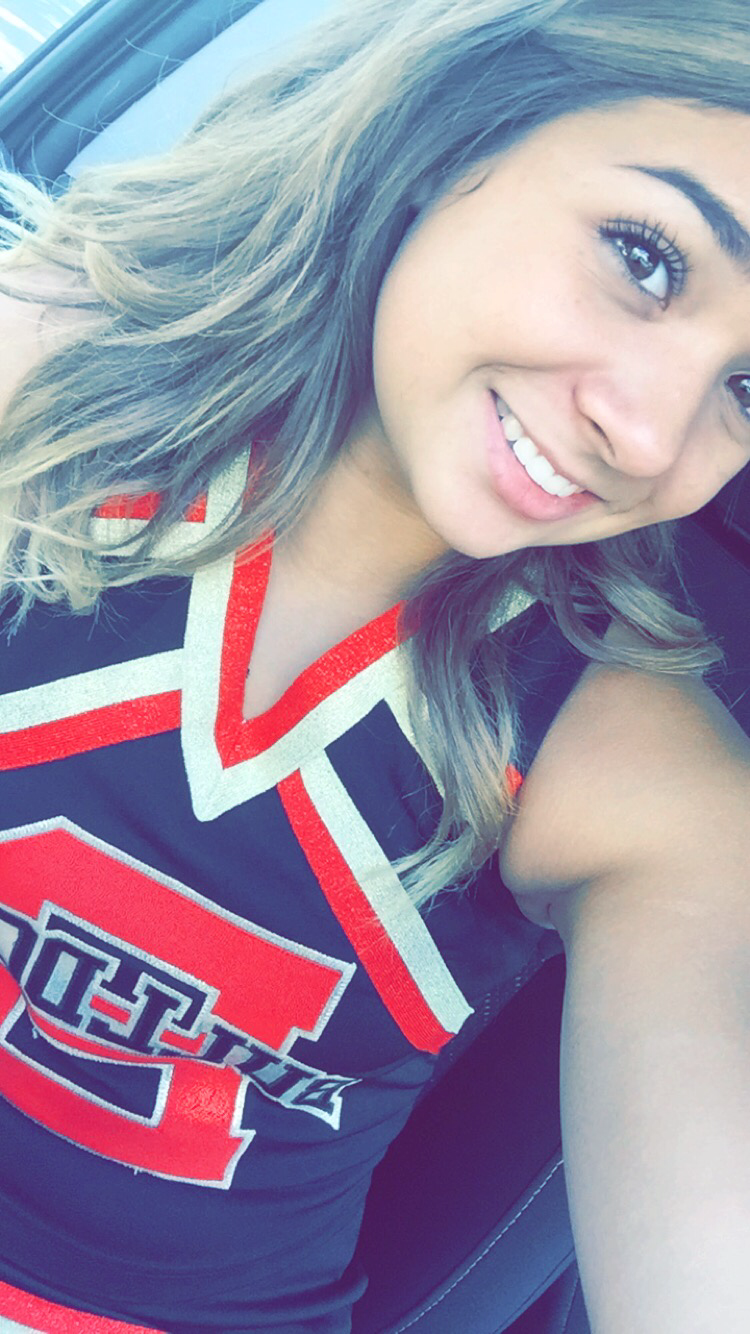 As she takes the mat with her team, adrenaline running through her veins, Sophia Plourde stands above the rest, taking the floor with pure motivation in her eyes. As Plourde stands on the corner of the mat about to do her tumbling you can almost hear her breath over the roar of the crowd. “Five, six, seven, eight,” one step, step, hurdle, push, push, pull. Landing the layout perfectly as the crowd goes wild. It’s moments like these that drive Plourde.

Plourde is completely self-motivated and sets her own goals, according to coaches and teammates. She has never been someone who looks to other people to make decisions for her or need motivation from others; whether that be coaches, teammates, or anyone else. There has never been a moment in her career as a cheerleader where she hasn’t pushed herself to strive for greatness, according to Coach Jennifer Melendez.

“I am my biggest motivator,” said Plourde, “I always set goals for myself to achieve.”

Coaches and Plourde aren’t the only ones on the cheer team that see her self-motivation. It shows through everything that she does. This is one of the reasons that she earned the team MVP award and Upstate Eight All-Conference as a sophomore and junior, what she called her biggest accomplishment in her high school cheerleading career. She was awarded these because of her outstanding work ethic and her ability to motivate and inspire others, according to Melendez.

“Sophia is the hardest working athlete I know on the Varsity cheer team,” said Brittany Wall, one of Plourde’s teammates. “She works on new skills every practice and won’t stop until she perfects it.”

As of right now Plourde has a layout which is a tumbling skill, she sets her arms up, then squeezes her abs and legs then pulls her toes around, but is working towards a running full which is a higher tumbling skill. In a full she sets herself up with her arms straight then wraps them to the right side of her body and turns her head to the right. That’s what causes her to spin. Nothing is going to stand in her way in order to obtain this goal. She has been working on standing fulls over the whole summer and is very close to getting it. A standing full is like a full but she takes a small step back and sets her arms up, and pulls her arms to the right side of her body with her head, like a running full but she has her arms and legs both bent. In order to get her feet over she pulls her shins and feet over as well.

For stunting, her and her group can hit one and a quarter ups which is where the flyer puts both her feet in Plourde’s and her other bases hands, she holds both of the toes, then they dip and stay stepping and spinning while she lets go of her left foot and use that hand to grab her heel. They end up facing the front with the flyer on one leg all the way up in the air. as well as many advanced body positions. The group works in unison to keep the flyer in the air as they perfectly hit the final body position then an elite dismount such as a full down. Plourde makes sure this is executed perfectly.

“She’s so self-motivated, and her talent in all aspects cheer, jumps, dance, tumbling and stunts” says Courtney Mansour a member of Plourde’s stunt group.

Plourde started cheering at the Batavia Park District, then went to Allstar Rebels before joining the BHS team. Within those programs, she has been on level three, four, five and varsity. Although she is highly self-motivated, Plourde says that she couldn’t have done this without the support of her family and friends.

“The hardest thing is going to be at the end of this year when I say goodbye to all of my teammates that I have cheered beside for years,” Plourde said of her senior year. “Throughout the years they’ve become my best friends and my family.”

Plourde pushes and pursues everything until the end. By the end of this season Plourde will have accomplished so many things that others haven’t. She has overcome mental blocks, received awards, has the girls on the team looking up to her always. But most importantly, she never gives up, according to her teammates and coaches.

“As for failures, I do not believe that I have had any,” Plourde said. “I am not perfect by any means, but failure is when you give up. I have always pushed myself even when things become overwhelming and stressful, but the outcome is well worth it.”