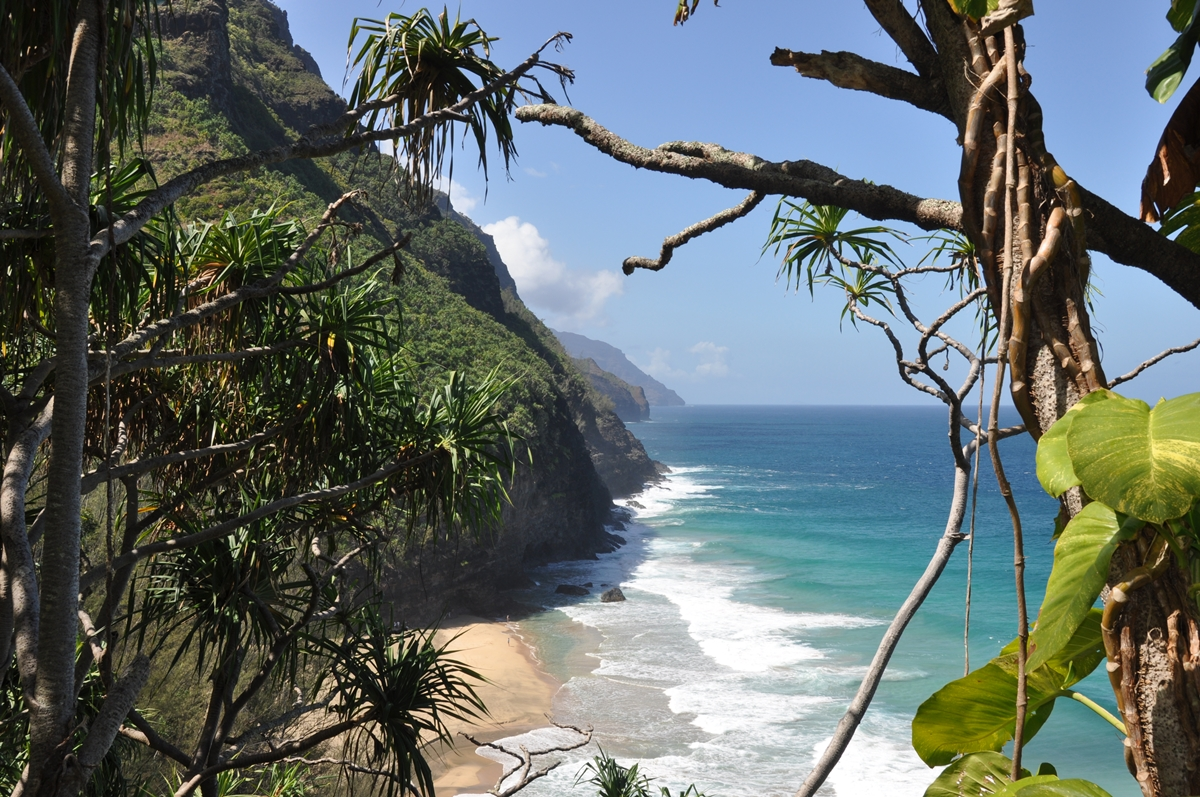 The breeze pushed back my hair as I stared down to the foaming, clear ocean rushing upon the sandy shore. Colorful vegetation covered the ground below. My throat tickling with thirst as I sit down upon a nearby rock to enjoy the amazing weather and scenery.

The Hanakapiai Trail in Hawaii is a moderate to strenuous hike by the Napali Coast and reaches a height of 400 feet. On the hike you see lush vegetation and colorful creatures. You travel along an ocean side cliff and in and out of valleys all leading down to Hanakapiai Beach but if you want you can go farther up by following the Hanakapi’ai river to a waterfall.

At the bottom of the hike the view up can be described as, “Rugged and interesting” according to Mary Pellico. Once the hiking began suddenly it was a new world as the small road behind me disappeared before the path took a turn upwards. Large rocks surrounded the path and dust would fly up as my purple hiking boots scuffed the ground. During the beginning the hot summer sun beat down upon me and my face began to glisten. As we finally got to an overlook you were able to see the beach below.

To get to the beach we had to first hop over a small creek at the very end of trail. When we finally reached the sandy beach with the waves crashing upon the shore, “it was a unique yet beautiful landscape,”  said Drew Pellico.

Up above a storm was brewing and dark clouds covered the sky, making wind turn the ocean. The swimming itself could be described as “thrilling and exhilarating,” according to Bill Pellico. As I dove underwater the icy water hit me refreshingly and pushed me back to shore. This cycle was repeated for what felt like a lifetime and I got out shivering with wrinkled hands and toes.

My brother and myself got dried up and decided to go exploring. There were huge caves all around with giant boulders that towered over us; they could also be described as “weird meteors that crashed from outer space” said Drew Pellico

Once we were all done exploring we finally had to start our long journey back. It was a very long and sad hike back knowing we wouldn’t be back in that paradise cove for awhile. All at once the landscape around us wasn’t as beautiful and my family and I weren’t as intrigued. Near the end of the hike we were awoken with a scary surprise as a centipede was in the middle of the path. My reaction was to scream and fall backwards in fear. My dad on the other hand simply shooed it off to the side, and my whole family watched it slowly slink past the dirt path into the brush. I’m glad that was the only scary creature we saw on the hike back.

On the road beneath, once we finished the long hike my body ached and my feet were sore and covered with blisters, My sunhat then was used to brush off  my forehead. The view at the bottom was “panoramic” as Bill Pellico would say and it really made me appreciate the beauty of the different unique nature that we don’t have back in Batavia.