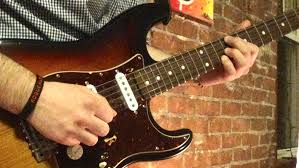 Observing Kate Domeier over the last two years that I have known her, there will always be one event that sticks out to me the most, and that is watching her play her guitar carefree of the world around her, as if she were a bird in flight enjoying the warm and crisp summer air, truly free.

She is “a budding artist and won’t hesitate to forge her own path,” according to Sam Mack, a senior at Batavia High School.

Her interests come in a wide variety of different hobbies. Whether it be music, theatre, or photography, all of these giving her a chance to help make her voice be heard.

“Her passion is very strong and admirable,” said senior Josh Young. “It’s her strong point and she loves it”

Her passion for music started at a very early age in her life.

“It would have to have been my elementary school music teachers Mr. Davis and Mrs. Jensen,” Domeier said. “They taught me how to sing and how to play guitar. They directed my first musicals and helped me to read music…”

Her passion would soon evolve from not only playing violin for Batavia High School’s orchestra, to being one of the vocalists and guitarists for her band called Sinister Secret.

“(The band) was originally formed when my friend Alissa and I were like ‘hey I like music, you like music, let’s do music together,’” Domier said.

Together they would combine forces, strum their guitars, and create their own voice musically, in which the melodies of their creation were like waves of the ocean, moving along with grace.

“It gave me another reason to hangout with my friends, and it helped me to become more confident in my skills as a musician and in myself as a person,” Domeier said.

Her creative limits were not at its peak just yet, however. She also expressed a fond passion for theatre and its powerful ways that it tells its own story.

“When I first saw Annie, it was originally a broadway musical and as a small kid knowing nothing of how the world works I thought, ‘I wanna try that’ so I did shows in my elementary school and again in high school,” Domeier said.

Her efforts to be a part of theatre came to life, as she would spend countless days reading scripts and practicing scenes over and over again. Her highlight would be during the production of Little Women.

“I was an understudy and got my part one week before the show. It was simultaneously terrifying and amazing,” Domeier said.

Her interest in both music and theatre however are just scratching the surface of her gargantuan size iceberg of a creative mind, “I have settled on being a photojournalist,” Domeier said. “I like having my music as a stress reliever and a hobby more than I would like it as a career. It’s fun to have music that I play and don’t have to take seriously.”

After I was intrigued by her statement, I then wanted to know more about what she was planning to do with her future, to which she openly stated her interests in what she wants to cover.

“Probably wartime events and kind of heart-wrenching stories. I hope to go into the GI program to help to pay my way through Columbia College of Fine Arts in Chicago,” Domeier said.

Domeier as a person has a creative mind that does not seem to show signs of stopping anytime soon. As she looks onward towards the future it’s easy to tell that she is planning for something much greater in her life ahead of her. A future that will challenge her creative voice further.

“She has dreams to be successful,” Young said, “and I admire that about her.”