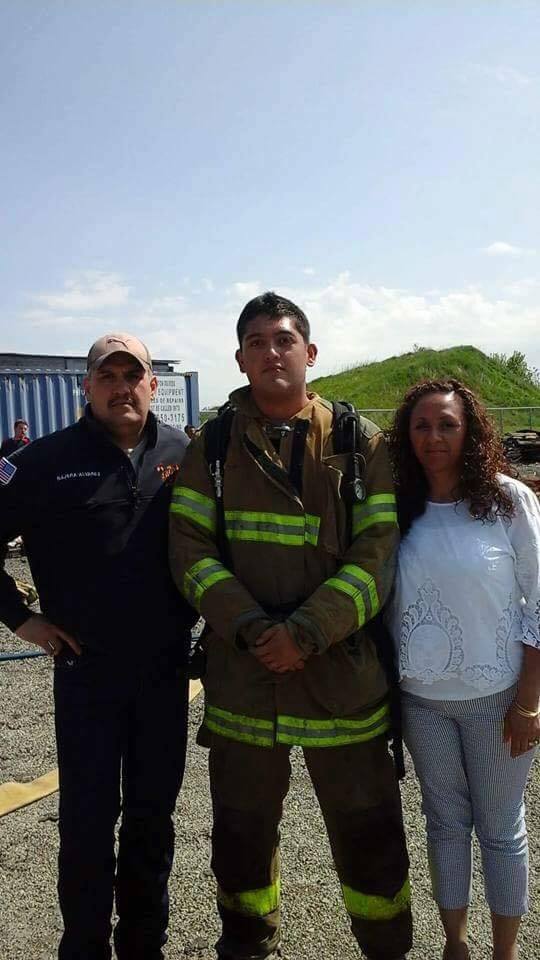 By Stephanie Garcia and Liliana Leanos

Pride is a feeling that most of us are all familiar with, whether it’s self-pride or because of something someone you care about did. Either way, it’s a consuming feeling, in a good way, and what Daniel Najera’s mom feels when she talks about her son.

“I am very proud of how he’s grown to be as a young adult,” his mother said.

Daniel Najera is a firefighter in training and has the potential to do great things, according to those around him. He grew from being an awkward, anti-social child to this independent adult that does not need to rely on anyone.

“I plan… to make my family proud and get a degree in college, and also one day work as a full-time firefighter,” Najera said.

His plan is a solid and realistic one that some high schoolers can only hope for.

“[This] is what he chose to be and I’m always going to be there to support his decisions but I’m proud of my son being a fireman,” Liliana, Daniel’s mother, said.  “We aren’t just stealing jobs, [we earn them and] we work for them and I know he’ll be a fantastic firefighter,”

Daniel grew up as a “very shy and respectful kid. He always put other before himself,” Liliana said.

This still shows in his personality today. His goal to help others and save lives most likely. Even save a cat from a tree, which he can do easily with his height. Standing at six-foot, three-inches, he towers over everyone, basically looking down upon everyone.

His life has not been average. Especially moving to a mostly white city like Batavia while being Hispanic. Standing out is something that is not wanted in most people’s lives. Especially while making this big change.

“Growing up Hispanic where the majority of my life growing up was around Hispanics as well, I had a hard time learning English in school because I would never talk English at home,” Daniel said. “Growing up as a Hispanic, I’ve also dealt with some racism but in my opinion growing up Hispanic in the US is an honor to represent where you come from and also have the chance to prove the ignorant wrong. Growing up Hispanic also meant knowing not to mess with your mother’s nerves.

“Well growing up as an only child wasn’t bad. Most of my childhood I grew up with family relatives and cousins. I never felt alone (as an only child). The relationships I’ve built made me forget that I was an only child, spending Christmas, Thanksgiving, Easter, birthday parties, and every other holiday with them made me feel happy and fortunate.”

Being with friends with family all the time hinders social skills which is what happened to Daniel. Making friends wasn’t easy but he managed in a new place. This wasn’t easy with the impressions he gave off.

“I thought he was super tall considering that I’m 5’1,” said Yaira Gallegos, Daniel’s friend. “I think Daniel has changed a lot since I first met him. He’s more mature now than he was when I first met him.”

Daniel was once a small town kid from Texas, didn’t know much from outside his family. Moving here he learned a lot and grew as a person, influenced by all the people around him, as well as growing in height. Now he has dreams of saving strangers for a living and nothing can stop him from achieving that goal.