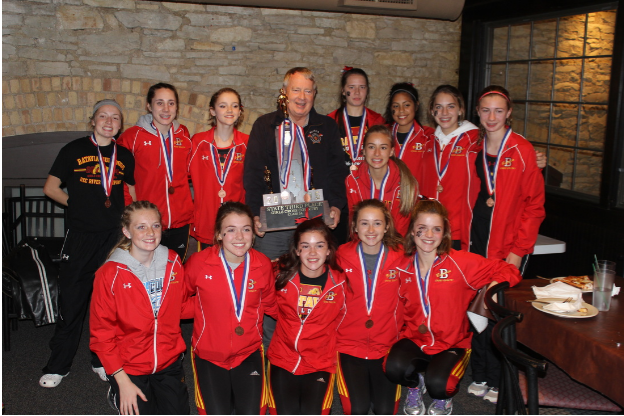 By Tatiyana McSwine and Maggie Boersma

Pacing, faster and faster as she takes each step getting closer to the finish line and leaving her team’s opponents in the dust.

In the 2015 season, Malay finished 84th in the IHSA State Championship and making the run her personal best time. She is an important piece to Batavia’s hopes of repeating last year’s success at the state competition, a third-place showing as a team. She runs quickly, feet pounding on the ground as she crosses the finish line, exhilarated with the race.

The team and Malay are striving to run at state this year, as they have in the past. The first race for state is regionals on October 22. If they do well in this, they will move on to the sectional race on October 29. After this comes the state race on November 5 in Peoria, Ill.

Malay has been running long distance for quite a long time, as well.

“When I was little I would run a few 5Ks with my mom since she is an avid runner,” Malay said.

From these moments in her life, her running would only change for the better.

Malay has been running cross country for Batavia since seventh grade; this is her fifth year. Her inspiration to join cross country came from her dad.

“In middle school, my dad said it would be fun to join a team sport and he suggested cross country,” Malay said.

She has learned a lot in that short time and has improved since she first started.

In her freshman and sophomore year, Malay qualified to run at the IHSA state meet. She continues to run on the varsity team and is now in her junior year of high school.

Malay has been approaching the sport with a professional attitude.

“It is important to set goals for yourself and I am constantly changing and improving my goals as I accomplish them,” Malay said. And she is not the only one who believes this.

“The motivation has to come from within,” said cross country coach Chad Hillman.

Malay’s goals and ambitions help her running often, and help her improve. She also inspires some of her teammates, as well.

Cross country “sisters” hang out at meets and act as a sort of mentor for their younger partners. Pelech, a freshman at Batavia High School, has also been running cross country for a couple of years. Both of the students also attend another cross country program, as well.

The running doesn’t stop at the end of the season. Malay still strives for greatness at the cross country summer program. The program is ambitious for runners, and many students and cross country runners from Batavia attend it, including her. She claimed, “During summer camp we run up to 10 miles.” This is certainly a long distance, though they also run long distances during the season itself.

“Cross country is an extremely mental sport and it is so important to be mentally tough and keep pushing yourself,” Malay said. “Don’t quit on yourself!”