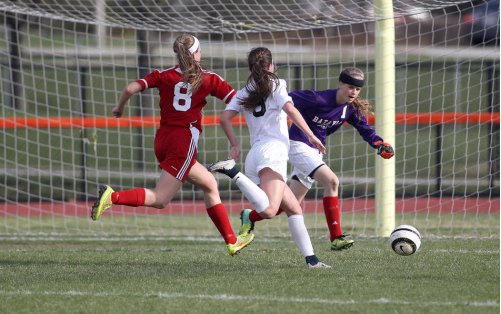 By Kelly Bleakley and Kinga Blando

Freshman Jenny Scara walked onto the freshly cut green football field three years ago nervously awaiting her first game playing against Plainfield Central with the Batavia girls’ varsity soccer team. After the whistle was blown, all of her fears went away, according to Scara.

Since then, Scara has been named Upstate Eight All-Conference the last two years, along with receiving the All Sectional awards and several honorable mentions.

She knew at that moment, the field was her home for the next four years.

“I was very excited and proud to be on the field with upperclassmen and having them trust me as their goalkeeper,” Scara said of her first game.

For those people close to Scara, they know her as an outgoing character filled with laughter and energy. Her attitude shows that she will not let anyone put her down and keeps her head held up high.

“Jenny is willing to be her own person regardless of what other people may think,” said varsity soccer coach Mark Gianfrancesco.

Jenny has always been known to show a lot of character on and off the field. If you ask anyone on her team or around school they will also agree.

“Jenny is unique because she tells it how it is and is honest with everyone,” said teammate and friend Mackenzie Foster.

“I really like how we do a spirit week for homecoming because of how involved everyone gets and everyone is hyped and has so much school spirit,” Scara said.

Scara definitely likes to be involved in the action, but trying to involve others in that action is equally important to her.

“She tries to get to know everyone in the school,” Foster said. “She doesn’t judge a book by its cover and genuinely cares about everyone.”

From a determined little girl to an even more determined and fierce senior, Scara has always excelled in soccer. At the age of three, she started the sport and has been playing ever since. She started playing at Tri-Cities Soccer Association with its recreational league and then continued to a higher level at Strikers Fox Valley soccer club and has been playing there since.

“I’ve been teammates with Scara for about 10 years and wouldn’t have it any other way,” Foster said. “She always pushes everyone to get better. She is super intense but in a good way. She gets work done and motivates others to do so as well.”

Scara influences many of the people around her with her unique and genuine personality, according to those close to her. As a goalkeeper and one of most experienced varsity soccer players on the team, Scara takes on a leadership role on the soccer field, aided by her intense personality.

That intensity led to an athletic scholarship to Illinois State University. After a bumpy recruiting process with the State University of New York-Binghamton, Scara finally found the school for her after visiting former teammate Megan McEachern at ISU.

“I choose ISU because the coaches are really cool and awesome and when I did the overnight with Megan McEachern I fell in love with it and I loved how the team played together,” Scara said.

When Scara graduates in 2017 and goes on with her soccer career as an ISU redbird, students, teachers, and peers will remember her as a motivator, leader, and a determined person.

“I will remember her as a crazy energizer bunny that just never stops going,” Foster said.

Scara has accomplished so much at Batavia High School and is overall a great influence to everyone around her. She will go on to accomplish even more at Illinois State, according to Gianfrancesco.

“I will remember Jenny when her high school career is complete as the meek girl that was on varsity as a freshman,” Gianfrancesco said. “She has transformed into a fierce competitor and tireless worker in order to get better at her position.”