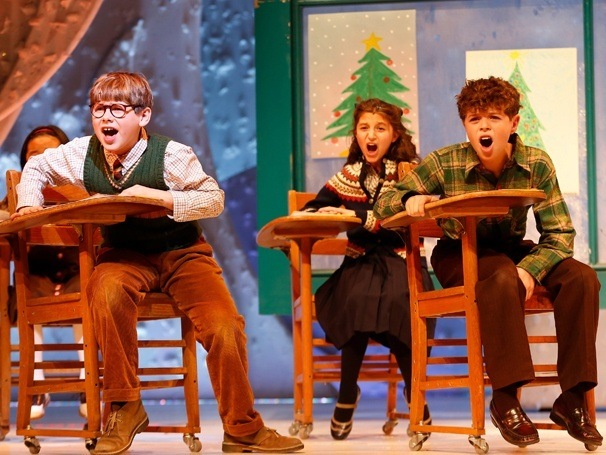 Lights start to get brighter. In your ear is the back noises of the different voices of people. They are ready to watch the show and the performances of all the actors. Your heart feels as if it’s going to pop out, but luckily enough it doesn’t. The palm of the hands feel as if you just washed them under the sink. The heavy curtain is pulled back. The sound of the edges from the curtain sliding across the dark floor and soon enough the stage is set. You’re standing in front of a crowded theater. Scared and nervous is an understatement. “Don’t mess up,” you tell yourself quietly. Soon enough the play begins. The chance to disappear from yourself and go into a whole new character. Once it’s done, the heart stops racing and your relaxed and think that wasn’t so bad.

This was a quite normal feeling for 16-year-old JD Rodriguez.

When Rodriguez was 12 years old, he was given the once in a lifetime opportunity to perform on Broadway. This is something actors dream about. Rodriguez had taken the role of Schwartz, in the play,  A Christmas Story, The Musical.

“It was indescribable,” Rodriguez said. “The whole thing honestly felt like I was in a dream and none of it was real. Towards the end of the experience, it all started to settle in that it was actually happening and so I took in every bit of the day that I could.”

During Rodriguez’s time on Broadway, he had to live in New York for about three months. Of course, while he was living in New York, he had to keep up with his school work, so he had a tutor but eventually him and his mom decided it was more fun to site see.

“It’s unexplainable,” said Rodriguez’s older sister Taylor. “It all happened so fast and the family was ecstatic for him. We know it was most definitely something he was capable of, but never saw it coming so soon. It was a super, awesome, and emotional moment for our family.”

The audiences applaud as the show was over. With a big smile. The one where it almost hurts to keep doing it. The face looking redder than a ketchup stain on your good shirt. The feeling as your cheeks soon to get warmer. JD has finished yet another play. Before and after the great experience, JD has still been pursuing his acting. When JD was nine he had the role as, Artful, in the play Oliver!, which JD called his favorite ever to star in.

“My role was so awesome and I learned a ton from that experience when it came to meeting new people and making different types of friends,” he said.

As a young actor, he was cast in the lead role as Charlie in Charlie And The Chocolate Factory. This was the show that JD didn’t think anything of, but it sparked his interest in acting. He then went on to star in the TV show Chicago PD, as character Dylan.

“It was so surreal, seeing our friend on TV,” said Karlee Rindt, a friend of JD’s. “It was definitely cool and an awesome thing to say you could do. I remember watching the scene over and over.”

We all know there are many actors today, but we wonder what makes each one of them different, and why they’re our favorites.

“The main thing JD brought out was energy,” said Nathan Knautz, another sophomore at BHS who has worked with JD in the play Heather’s. “His energy built everyone up and gave this new energy that improved all our performance. JD has worked hard to get where he is today, and without the love and support from friends and family, he wouldn’t know where he would be today.

According to JD, he hopes people see him as the kid who enjoys acting, not the kid who’s been on Broadway. He wants people to see that he does work hard to get these roles he’s been in.

“I love (acting), JD said. “It makes me who I am today and I would never have changed anything has happened in my past with acting.”