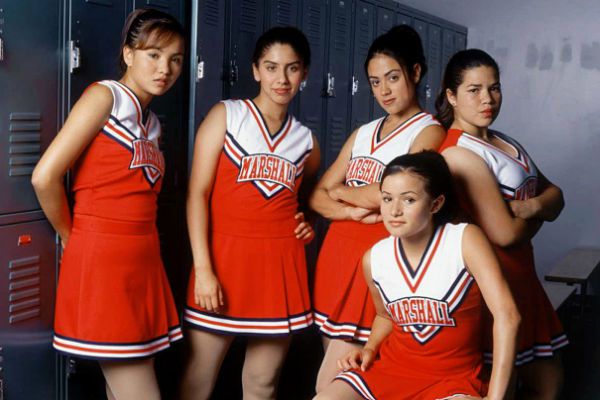 This movie was based on a true story of a middle school, even though it takes places in high school. It features Latina students who want to join a dance team but have no coach. The new teacher used to dance and they convince her to become the coach. They go on to compete in competitions and inspire people. iSi se Puede!

Wendy Wu features Brenda Song as a ninja in training. Her grandmother lets in a strange man who helps her train and learn her family ways. As she discovers her family heritage and faces evil during the homecoming dance she realizes she is not a normal girl.

this is a movie about a boy who lives with his father and little sister. His neighbor encourages him to step outside the stereotypes and join her double dutch team. Izzy, the main character, faces bullying for being in a “girls sport.” He overcomes the ridicule and competes in the qualifying competition. Izzy also becomes closer to his family.

Four girls follow their dreams of singing and performing in front of audiences. They meet a producer and have a meeting with a record label that goes well, but they must give up some of their creative liberties. Arguments occur and a breakup happens but as one of the girls dogs get stuck in a sewer, they come together to save him.

5) Kim Possible: A Stitch in Time

Kim Possible was the best tv show and the movies were no less.  Rufus’ decedent (a large naked mole rat) warns Kim about the future and how she also need to get Ron back from Norway. A Stitch in Time followed Kim and Ron as they fought more crime. This time, they save artifacts and people as always.

Return to Halloweentown is the fourth Halloweentown movie produced by Disney. This series is meant to be an played down version of a horror story including magic and evil and demons. The main character who has just turned 18 decides to go to Witch University, despite all the troubles she forwent last year. She returns to halloweentown expecting to learn how to use magic, but they learn anything except for spells.

The best movie in the trilogy, Troy and Gabriella get a summer job at a country club. Troy gets attention from people of high places and leaves his friends behind. In the end, the friends reconcile and everything is good for the next movie, High School Musical 3.

Mitchie comes from a middle-class family so when her mom gets her a free ride to music camp, she jumps at the chance. She is embarrassed to tell people that the reason she got there was because her mom is the cook. She lies to gain popularity and breaks friendships, and ends up losing everything when her secret gets out. This is a Disney movie though and she is able to make everything better and be friends with the good guys.

A pair of twins get close to their 16th birthday as weird things start to happen. Fate brings them together through magic as they discover they both have powers and help each other out. The happy reunion is short-lived as the darkness is overcoming their home kingdom and coming after them. They travel to their mother back home to see if she’s okay, only to find she is in the hands of evil himself, her brother-in-law and the twin’s uncle. They defeat him after he sabotages their parties and lives ,then consumes their guardian angels. Everything is set right until the sequel, Twitches Too.

A movie about the future house that everyone wants. “She” can cook and clean and keep you safe. She is the dream home that everyone wants. Until she becomes a little too clingy, sabotaging relationships, assuming more of the position of a kidnapper than a smart home. Eventually, the family gets rid of her in a kid-friendly way obviously and the family are turned away from ever owning a smart home.

Honorable mentions: Cadet Kelly, Johnny Kapahala: Back on Board, Luck of the Irish and Eddie’s Million Dollar Cook off.