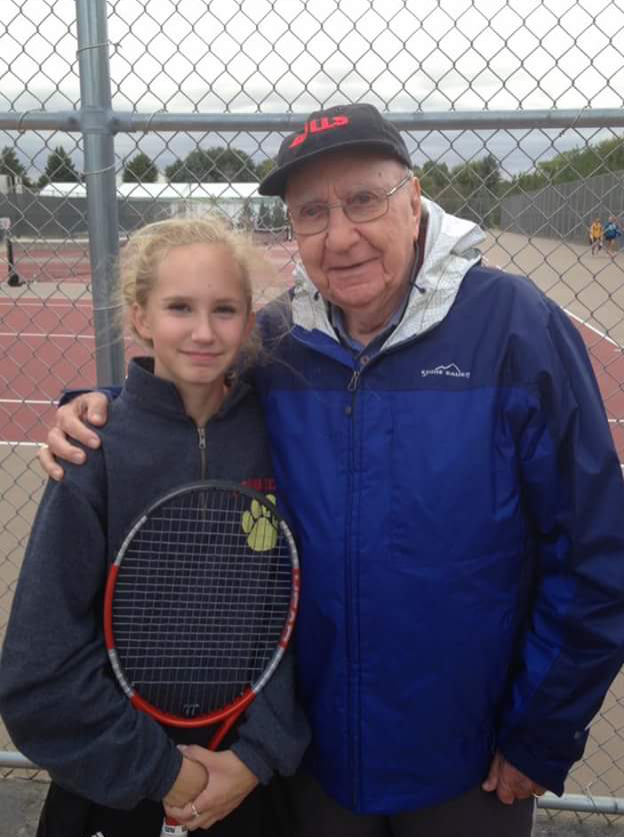 “I just won conference in Tennis.

My dream job would probably be being a YouTuber because they get to travel a lot, they run their own job, and they make a lot of money. It’s a fun job. You make a lot of friends doing it, too.

I don’t know who my hero is. If anything my heroes are my friends because they always stand up for me and are there for me. When I look back on my tougher times they were the best thing in my life. It’s kind of like they save me when I need it.

Fall is probably my favorite season because that’s when all the holidays start up and it starts to get cold which is nice. Plus, the foods are great in the fall.

My favorite subject in school is either art or Latin. I really like my Latin teacher and the class is just awesome. Art is really just really great because I’m actually learning stuff.

If I had three wishes I would wish to be able to fly so then I could eventually travel the whole world. I’d want to be really good at playing instruments and singing. It would be really cool. My last wish would be to know my dream job and be able to do it. I would be happy if I had an amazing job, and it makes everything easier.

In my free time I like to watch Youtube and Netflix. I’ll draw, but it doesn’t happen very often. I sometimes hang out with friends, too.

The most adventurous thing I’ve ever done is this one time I went to the park with a bunch of my friends when two guys started chasing us. I got really mad, so I turned around, flashed a flashlight in one of their faces, and was like “What do you want?” Then I turned to my friends and was like, “It’s alright, it’s just little kids.” They were like a year older than us, though. Like, they could have hurt me.

My favorite vacation I’ve ever been on was when I went to the Wisconsin Dells with my friends last spring break. It was really fun and nice to spend time together.

My proudest moment in my life was when I just won conference in tennis. I didn’t get on varsity, so it was kind of like proving that I should be on varsity. I had improved so much over the season and it was a really good season for me.

In ten years I want to see myself with a really cool job, a really cool place, and having already gone on like 20 million adventures. I want to be the aesthetic I aspire to be too.

I have a celebrity crush on Connor Franta. He is so caring, he’s very aesthetic, and we are actually pretty alike so I can relate to him. I can look up to him too because he makes inspirational videos.

If I had one million dollars I would travel the world and go everywhere. I would also save it but I would go on the most epic adventure ever.

The most important things in life are happiness and good vibes because if you don’t have that you’re just going to be sad. Also friends and family, but happiness trumps everything.

My biggest pet peeve is when someone talks over me while I’m talking and interrupts me.