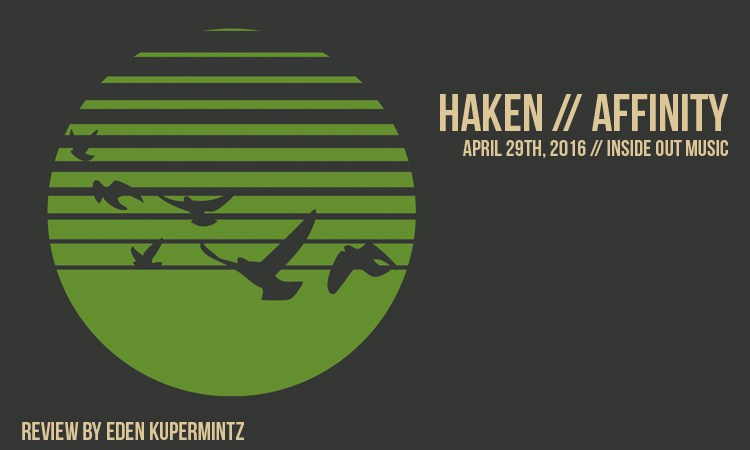 Progressive metal as a genre can range from a variety of different extremes. Whether it’s a style that is mostly screaming vocals, or having a more clean approach, progressive metal can be an epic experience depending on how the viewer listens to it. The band Haken was formed in 2007 by members Richard Henshall, vocalist Ross Jennings, guitarist Matthew Marshall, keyboardist Peter Jones, drummer Raymond Hearne, and guitarist Thomas MacLean. Since then they have progressed they have gone through numerous changes in lineup, but as it stands currently their lineup is Jennings, Henshall, Hearne, Charles Griffiths, Diego Tejeida, and Connor Green. Their April 29 release of Affinity has showcased their musical talents excellently and the album creates an enjoyable experience for metal fans and progressive rock fans everywhere.

The concept behind the album deals mostly with the topic of the evolution of both computing and humanity, how they have an impact on our society today, and what it could potentially do to us in the future. It also leaves another question that we must ask ourselves everyday, and that question is “What if we go too far with advancements in technology?” and “Will artificial intelligence be the end of all humanity or will it be our salvation?”

As I was listening to the album in its entirety, there was one song in particular which caught my attention. The song “1985” expresses a lot of the band’s earlier influences in the early prog-rock scene. What really makes this song stand out from the rest is its overall presentation when it comes to the sound. As I was listening deeply to the style that was shown I quickly made comparisons to bands like Rush who would make similar chord progressions and follow more of a asymmetrical rhythm.

Another notable track off of this album would be the song “The Architect.” Its total length being about 15 minutes long really showcases the amount of effort and talent the band puts in to make it sound beautifully. This epic track has equal standing compared to other songs in their discography like “Visions”, “Crystallised”, and even “Celestial Elixir”. Weather it be the harsh and heavy articulate tone of the guitars, or the ambient and atmospheric sound of the synths playing in the background, every instrument that is incorporated into the making of this song screams epic.

As a metalhead, there are a lot of things to consider when judging styles of music that are related to it. As a musician as well, I would also consider that the type of music Haken makes could also be appealable to more than just the metal community. With such a diverse style of music that they produce it’s hard to pinpoint an exact style of music that they play. With rhythms that can make the audience tap your feet and bob their heads no matter what style of music they listen to, it’s safe to say that in my opinion I think they can make a mark in the musical community within the next few years. Overall out of 10 I would rate it a 10/10, based on the amount of potential and musical talent that these guys possess.