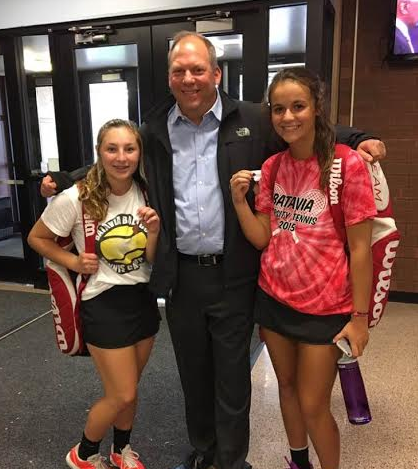 The morning of Oct. 20, the girls 2A tennis team for Batavia High School played their first match at the IHSA State tournament in Arlington Heights and lost in both the doubles championship and doubles consolation. Freshman Maddie Durso and senior Julianne Robinson were the only girls from BHS to make it.

After beating Geneva in sectionals, the girls qualified for State.

“They had a big win against Geneva in the sectionals,” said tennis coach Brad Nelson. “We knew if we could get past them we could qualify for state.  We were not seeded and needed to upset two teams to make it, so it was quite an accomplishment.”

The girls arrived at Arlington Heights and were against Hannah Keidan and Sophia Kreider from Elmhurst in the Doubles Championship. They lost the first set 6-3, and lost the second set as well 7-6(5). The next day they had another match at the Doubles Consolation against Oak Park-River Forest.

During Doubles Consolation, they lost the first set 0-6, but won the second set 6-1. This took them to a tiebreaker match where they lost 7-10, eliminating them from competing further.

Getting to IHSA State was tough work. Coach Nelson had them practicing everyday for one and a half or two hours from June to mid October, not including the tournaments and games.

“Each practice includes some running, stretching and footwork drills,” Nelson said. “We warm up by hitting all of our shots (forehands/backhands/volleys/serves and overheads).  We play some competitive drills and usually finish with some situational drills or match play.”

Durso and Robinson, were the only ones on their team to make it to state. Julianne was captain of the Varsity Tennis team. Robinson has been playing tennis since second grade. She plays both singles and doubles and won singles at conference this year.

“I’ve learned that hard work and dedication is a huge factor in being successful,” Robinson said of her experience playing tennis. “I’ve worked hard my whole high school tennis career with state as my goal, and through lots of practice I was able to achieve it.”

Durso has been playing tennis since fourth grade, and has loved it from the start.

“Brad Nelson was my fourth grade teacher and he told me I should try tennis,” Durso said. “I ended up trying it and loving it from then on.”

She wants to continue playing and hopes to play college tennis for the school she attends.

When they arrived at state, both Robinson and Durso were very excited.

“I was a little nervous at first but also very excited at the same time,” Durso said about her feelings when they got there. “In the end I took first place for the number two singles position.”

Robinson, on the other hand, doesn’t get extremely nervous or stressed before playing tennis.

“I don’t really get stressed before matches,” Robinson said. “Occasionally I’ll get a little nervous if I’m playing a tough opponent, but nothing too bad.”

The whole team, according to Nelson, is very close. The team held a lot of younger kids and overall they tied for first in conference and even some girls from the team were able to travel down and watch Durso and Robinson play at state.

“Our team is full of a bunch of great people,” Durso said. “Everyone on the team is super supportive which helped you stay positive even when you were losing a match. Also a lot of great memories and laughs have come from this season because of the group of people on the team.”

Even though the girls came home from state with no wins, they had some personal achievements while there. Tennis isn’t just a game to them; it’s a way of life that they learn more and more of from day to day.

“Something I have learned by playing tennis is the more work you put in the more you will succeed,” Durso said. “I believe this really applies to anything in life.”