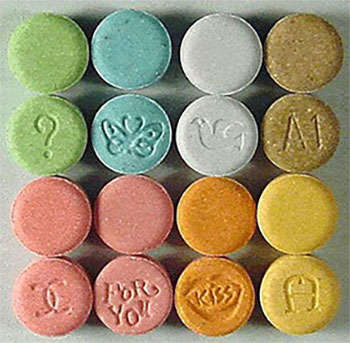 Sadly taking various kinds of drugs at parties are an epidemic that teenagers and adults alike are participating in. People are not only taking them willingly, some are drugging others. Many people know of drugs like ‘roofie’ and ‘acid’, but one drug not as many people know about is the drug ‘Molly’. This drug is becoming a trend, but since it isn’t as widely known, people aren’t as aware of the negative effects it can have on them.

Molly is MDMA which is short for 3,4-methylenedioxymethamphetamine. In a concentrated form, Molly is considered ecstasy, which is also popular at parties. Molly is short for ‘molecule’. This drug can be taken in many different forms, some of which are pills, powder (which can be dissolved in water), and capsules.

Molly takes about 15 minutes to reach the brain if swallowed by pill or capsule, and is generally known for creating a euphoric high. It increases the brain’s serotonin level, which is known for “controlling mood, aggression, sexual activity, sleep, and feelings of pain” says teens.drugabuse.gov. This is why when people first take the drug; they feel over excitable, and hyper. Molly also is known for increasing your heartrate and blood pressure, which is extremely dangerous for people who have heart problems.

Also, according to NBC News “The drug can be adulterated with other chemicals like bath salts, a relatively new synthetic powder that often contains amphetamine-like chemicals.” This means that it has many chemicals in it that can damage to the mind and body.

The drug is also known for causing dehydration, and an increase in body heat which can cause kidney failure. Molly also leads to anxiety and confusion for even up to a week after using the drug. People who use this drug for extended periods of time have problems with being cognitive, and have shorter memory terms.

Many people who are taking this drug have no idea what it is that they’re taking. People take this drug and can be taken advantage of, act in ways that can get them in trouble, and possibly overdose and die. Ten Wesleyan students were even sent to the hospital in 2015 after they had taken this drug. Two of those students were in critical condition.

This drug may have a sweet name and seem like a lot of fun, but is anything but. When talking to ABC News, Dr. Robert Cowen stated that Molly can cause blood vessels in the heart and brain to constrict and result in a stroke or heart attack. Not only that but the drug is highly unpredictable. Some people can take the drug many times and not be afflicted, but other may take the drug only once and die.

Molly is getting more and more popular, but people still aren’t aware what it does to you and how negative an impact has on the body and the mind. It’s not worth having a couple hours of fun if it ruins your health drastically.