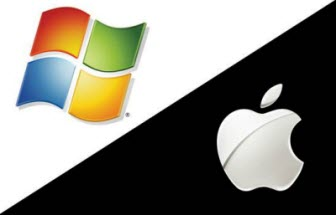 We live in a world where we are surrounded by electronics. From our 3-inch-by 5-inch phones, to our big 60-inch TVs, technology is growing and improving everyday. According to the United States Census,  83.8 percent of U.S. households own some type of computer. Amongst that 83 percent, there are two leading brands, Macintosh, better known as Mac, and Microsoft Windows.

While both have their strengths and weaknesses, the Mac has more to offer.

The biggest thing people worry about when it comes to their computers are viruses. According to Top Ten Reviews, the United States has the 11th highest rate of infections with over 30 percent of household computers containing some type of malware. When it comes to protecting your computers from these different types of bugs, Mac has the best software.

Mac uses OS X, while Microsoft uses OS, better known as IBM. Microsoft is used a lot more than the Mac and because of that, it puts a huge target on Microsoft’s back. Since Microsoft is bigger, it makes it easier for viruses to spread around. Most virus writers know the IBM platform in Microsoft, making it very easy for them to create a bug in computers. The newer versions of Mac are built on the Unix Kernel. The Unix Kernel is one of the oldest and most secure operating systems out there. Only less than 1 percent of Mac users get hit with viruses a year.

Another big thing people take into consideration when choosing their computers is price. Window computers can cost anywhere from $600-1500, whereas Mac products usually cost between $900-2000. Although Mac products are more expensive, they’re a lot cheaper in the long run.

Macs are built with durable and reliable materials. The average lifespan of any Mac (kept in good condition) can range anywhere from six to ten years. Some Windows computers use plastic and other cheap materials just to keep their prices low. Their lifespans usually last no longer than eight years.

The Mac’s operating system is faster, cleaner, and more stable than any version of Microsoft Windows. Although Microsoft has improved its operating system with Windows 7 and Windows 10, there is still a lot of bloatware that makes their computers slower and unstable.

Macs have scored the highest in customer satisfaction for the past decade and I can totally see why. Apple is molding and shaping a new world with all of their technology breakthroughs. From new phones to new TVs, Apple can only get better. So the next time your Windows 8 crashes, head over to your closest Apple store and try out an iMac.

Over the years computers change to meet your expectations. Two of the leading companies are Windows PC and Apple’s Mac. But as the years improve Windows did too but iMac has been lagging behind. If you were to compare the two Windows already surpassed Mac before it was even released.

Gaming: computers have a lot of space and storage room. This allows them to have a lot of downloadable games . Mac can only download so few games. More popular games cannot run on macs hardware. In the gaming department windows, PC have gotten better and better at running gams while Mac being new can barely run more than ⅓ of what Windows can.

Cost: the cost of a good Windows PC is $2000. That’s the same cost as the worst and cheapest Mac. Mac is a decent computer but the cost is too high. A cheap PC could cost $300. That’s a $1700 dollar difference from Windows to Mac. Most of the cost for Mac is put in for its design. A great PC can be built on the same budget as the cheapest Mac.

Time: Mac has been very slow on updates and innovations. It took months to get the new Office app for its computers and tablets. Also being a new product it doesn’t have all the testing and fixes it needs like the PC where it has years of experience to make it computers better. One thing on time for Mac though is products. Right after a major selling item has calmed down they go and show a new product about to be released. Mac could’ve taken the time to make and improve their product but instead they kept releasing and adding so much more product then the can handle and update in time.

Media: Mac can run media quite well and the visuals are great but Windows can just do better. The PC has more storage and data capabilities which allows it to run media much better than Mac can. Windows also allow many T.V. features like recording videos or helping users find the same type of show later. Mac on the other hand barely has any added features and extras under its disposal.