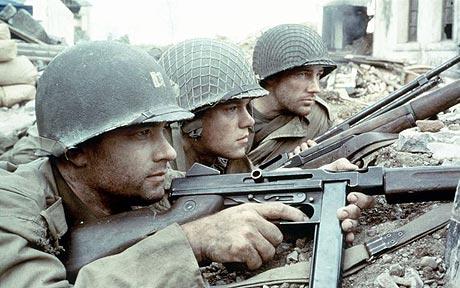 With Veterans Day over with, it’s safe to say that our mothers, fathers, sisters, brothers, and dear friends have sacrificed a lot for us to live in a free country that we live in today. For some it can be as simple as a half day of school, but for others it’s a day to honour those who have fallen or are continuing to serve our country when others could not. What better way to honor their sacrifice then watching a few good war movies? After watching these films,  anyone can see the amount of courage that these men and women possessed during their hardships.

World War II during the early 1940s was a lot like hell for most soldiers overseas, but it can also be a different type of hell on the home front, as well. Private Ryan was a part of the many who were a part of the landings on Normandy Beach. But when the GI went missing, the government knew something was wrong. Springing into action the American government orders a special group of soldiers to rescue the young Private Ryan. Will he make it out alive? Or will he be another tragic KIA?

General George S. Patton was historically a very well respected army official much like Eisenhower. But in this case Patton isn’t leading the charge in Europe; instead, he is tasked with the rough, dry, and barren deserts of Africa. A movie to surely please any history buff.

Vietnam visually was absolutely horrific and is easily one of the most grizzly in nature that we have ever seen to date. As these soldiers prepare for war physically, they must also undergo changes psychologically as well, and as the movie progresses onward viewers can really see how war affects soldiers on the frontlines for years to come.

A military coup gone wrong, what happened in Mogadishu in 1993 will always go down as one of the most horrific events in the modern world today. With countless lives lost that unfortunate day Americans must not forget the amount of courage, strength, and sacrifice troops had to give. Watch this heart-pounding, action-packed story that will move everyone’s emotions in some way.

As a sniper for the United States Army, a soldier not only has to be accurate in the field but also calm and collective under pressure. Training to be a soldier for his country, Anthony Swafford has committed himself to protect and serve even if he has to die for it. But little does he know that the fight is closer than it seems. And as the Gulf War approaches he will soon have to put his skills to the test.

Vietnam, one of the most hellish places on earth during the 1960s and even up until the early 1970s, the reality of this horrific war was one of the first of its kind where we were completely surrounded both day and night. Whether it be the ever-present NVA or the more elusive Viet Cong, the terrors of this war were existent day in and day out. These soldiers who fight their way through the jungles will never give up, never give in, and will fight on to survive for themselves and their comrades.

One of the bloodiest battles of the Vietnam War, the assault of Hill 937 will always be remembered for the soldier’s act of valor and determination. This film captivates the hardships of the soldiers and their constant struggle to take back what was fought so hard for before them.

During a time when rising tensions were boiling between the North and the South, the act of war became more and more present as the years went on. When the time came to fight, the North needed everyone they could enlist to help fight for their cause, even men of different color, different background, and different lives. A hidden gem you surely wouldn’t want to miss watching in a lifetime.

As Nazi Germany spreads its evil wings across Europe, France is caught in the crossfire yet again. But as the war rages on they will soon have the reinforcements they are longing for. With a team of Jewish insurgents, these brave men and women hope to weaken the occupation of the Nazis in France. And soon enough their job will become more than just fight the occupation, but to also avenge the execution of a once cherished family.

Anyone who is fond of a good action-packed adventure with a beast as a main character, look no further because this is the movie for you. With John Rambo returning to Vietnam after serving his first term, he is faced with a task of great importance. His mission: rescue captured POWs still trapped in Vietnam. A classic I’m sure everyone would enjoy watching.