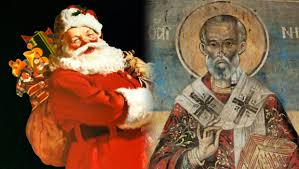 Some of my favorite memories of mine are from when I was little and running downstairs to see what Santa had left for my brother and me. It brings a unique joy and excitement that makes day-long smiles. Sitting in my pajamas, opening presents, and drinking hot chocolate makes Christmas my favorite holiday. As we get older, people lose that excitement and spirit for Christmas. To bring back this excitement, I am going to refresh your memory as to why this magical holiday started.

Christmas is celebrated in remembrance of the birth of Jesus Christ. The name comes from the Mass of Christ, or Christ-Mass, changed to Christmas. 336 was the first year of Christmas being celebrated on December 25th.

Santa Claus was in fact a real person. St. Nicholas was born in 280 in Patara, Lycia (present-day Turkey). As a young man, he lost both of his parents and used his money to give to the sick and the poor. A devoted Christian, he served as bishop of Myra (now called Demre). A well known story of St. Nicholas tells that he save three poor sisters from being sold into slavery by their father. St. Nicholas provided them with a dowry so that they could be married. His popularity dispersed over many years and became known as the protector of children and sailors.

Obviously, St. Nicholas has gone through many changes to become the Santa Claus we know today. His name changed gradually from his Dutch nickname, Sinter Klaas, which is short for Sint Nikolaas (which is Dutch for Saint Nicholas). Clement Clarke Moore was a major influence on the Santa we have come to know today. In 1822, he wrote a Christmas poem for his three daughters that was titled, “An Account of a Visit from St. Nicholas.” In 1881, Thomas Nast, a political cartoonist, drew on Moore’s poem and created the the Santa we know and love today. Nast gave Santa the North Pole workshop with elves, Mrs. Claus, and his red suit with white fur.