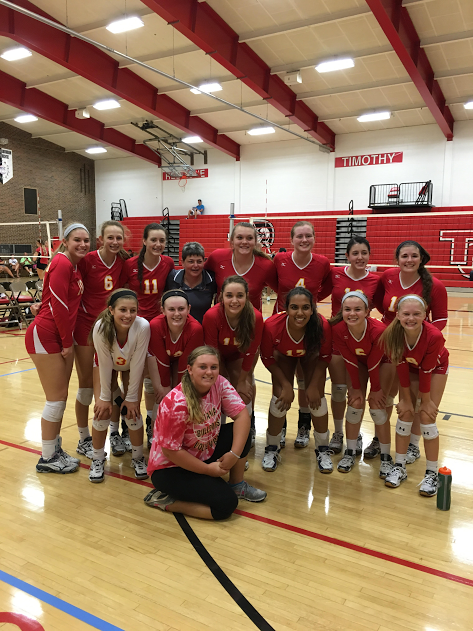 No. 15 on the court, playing for Batavia High School, slams the ball straight down the middle on the opposing side of the net, breaking the tie with Batavia’s biggest rivals, Geneva. No. 15 happens to be a freshman, Sam Juarez.

“I was shocked. My goal last year was to hopefully make JV, but making varsity was awesome,” Juarez said.

Juarez was a returning sophomore player on the Batavia varsity volleyball team this season. She said she learned from her experience as a freshman playing on the varsity team.

“It was definitely nice being back on varsity with my buds,” Juarez said. “I was more comfortable and confident this year because I knew what was coming at me.”

Juarez’s current position is the back row libero at her club volleyball team but for high school, she was an outside hitter.

Her friend Julia Kim also played for the varsity team as a freshman.

“It was great having someone who I knew really well. She makes her position look easy,” Juarez mentioned.

She didn’t expect she would make varsity as a freshman last year as if she was just trying the sport for fun.

“My cousin played and my aunt was a coach so I’ve grown up around the game,” Juarez said. “The first camp that I ever did was when I was six and ever since then I’ve just fallen in love with the game.”

Throughout Juarez’s volleyball career through club and school, she has earned multiple awards. Juarez has won MVP at nationals for her age division through her club volleyball league. Also through Juarez’s club team, she has won the national championships three years in a row at Orlando, Fla. in 2014, New Orleans, La. in 2015, and again in Orlando in 2016. For Batavia High School, Juarez was awarded player of the year and chosen for the AVCA Phenom list. Lastly, she was named player of the match against St. Francis. As Juarez’s career continues, so will her list of accomplishments, according to coaches.

Another friend and teammate from this year’s school volleyball is Sierra Leatherman.

“It is fun and a great experience to play with Sam,” Leatherman said. “She is always so encouraging and says positive things towards the team whether we are winning or not.  You can tell she is there to play her hardest and have fun while doing it.”

Players and coaches call Juarez a die-hard player who has a true passion for the sport. Not only does Juarez’s teammates see her being a great player but so does her high school coach, Lori Trippi-Payne.

“I have known Sam for a long time,” Trippi-Payne said. “She has been coming to our matches and camps since she was 10 years old, at least, maybe nine. Last year, when I needed her to step up and play outside hitter for us as a freshman, she did it with no complaints at all. As a matter-of-fact, she played great, and she continues to work on improving at that position, even though she does not play that position in club, nor will she in college. This season, she had over 200 kills and led our team in that category, which is so impressive, since all of our other front row players do play front row year round.”

Juarez is constantly at the court, improving her skills from high school season to club, according to players and coaches.

Set. Spike. Serve. Block. Just a few words Juarez is familiar with. Juarez will be very familiar with those words as she mentions, she hopes to pursue the sport for as long as she can.

“I am hoping to play Division I volleyball. After college, it would be awesome to play overseas professionally but that is very hard to do, so if that doesn’t pan out I would like to coach,” Juarez said.

According to Peyton Sachse, another teammate and friend of Juarez from high school season, she is happy she got to play with Juarez.

“Sam is one of the most motivating people I have been on a team with,” Sachse said. “Sam helped me a lot this year during my transition into the varsity team. She always knows how to pick the team up when we are down. Also, she always finds a way to pull out some points for us when we need them whether it is an amazing dig or a kill. But, what makes her a great teammate is that she can do all of these things while still having fun.”

According to Juarez, she wouldn’t know what she would do without volleyball.

“There is nothing that I love more than the game, besides my family of course,” Juarez said. “But there truly is nothing else that I would rather be doing.”