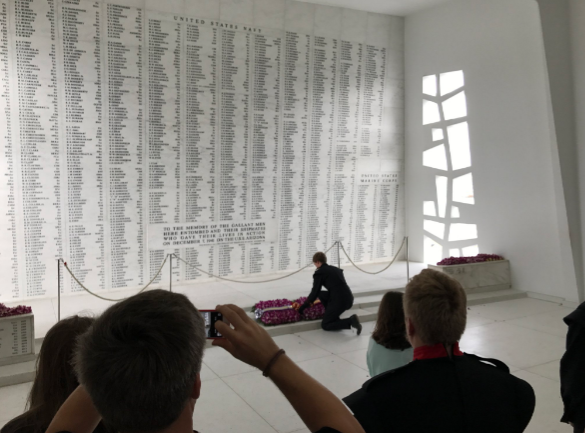 By Abby Hill and Isabella Jordan

The Marching band went to Oahu, Hawaii over Thanksgiving break to play at Pearl Harbor. This trip was with only 45 students and was “much more intimate,” according to Chris Owen, than the previous trip to Disney which had more than 200 students.

“I had a lot of fun hanging out with, not only the people in my section, but people in other sections as well,” said marching band student, Mia Chahmirzadi. “Being in a smaller group really helped us to connect to each other more and made it easier to talk to people in the band that we may have never talked to before. It was just really enjoyable experience overall and I would love to do it again.”

The weeklong trip was with only the school’s marching band. They went to Oahu, Hawaii, seeing nearly all of the tourist destinations in that area. This included the Dole plantation, a Catamaran cruise, surfing, hiking up an inactive volcano, a Hawaiian luau, marching in the Waikiki Holiday Parade, and many other sightseeing destinations.

“This is my first and only trip that I will take through BHS, and it was absolutely amazing,” said Robbie DiCosola, one of the marching band drum majors. “Hawaii is obviously beautiful, and I loved getting the chance to deepen my friendships with several people that were on the trip.”

Also, the main reason the marching band went to Hawaii, besides to bond, was to march in the Waikiki Holiday Parade, commemorating Pearl Harbor. This parade included more than 30 marching bands from across the United States. The mission of the event is to educate students on this important piece of U.S. history and preserve Polynesian culture. The parade was a mile-and-a-half long with 10-15 thousand people lining the streets, cheering as the bands passed. Of these people, many were survivors of the Pearl Harbor attacks.

“It was incredible to have hundreds of thousands of people cheering for us as we marched through the streets of downtown Honolulu,” DiCosola, one of the marching band drum majors, said.

Another major thing that the marching band did was perform on two ships from Pearl Harbor. These performances were on the USS Arizona and the USS Missouri. When World War 2 started, the Japanese bombed Pearl Harbor and sunk the USS Arizona, signifying the beginning of World War 2. The treaty to end World War 2 was signed on the deck of the USS Missouri. This gave the marching band the chance to perform where World War 2 started and ended. Students discovered that one serviceman who died on the USS Arizona was a 1935 Batavia High School graduate. This was told to all the students right before they performed.

“I found out that there were real Pearl Harbor survivors watching us play, which was a tremendous honor,” Chahmirzadi said. “It was just really cool to have so many people watching you do something you love. It was extremely rewarding.”

This trip also had a limited amount of seats available, so students were required to sign up before school started to reserve their spot. Unlike other field trips, this was paid for solely by the students. The cost was around $3,000, which included airfare, hotel fees, all of the attractions, and food.

“It was definitely worth the money paid, not only was the musical part fun, but that was only a minor part of the trip,” Chahmirzadi said.

The previous trip our band took was to Disney. This trip was very large, as it included the choir, band, and orchestra. More than 200 students and parents were included on this trip, which took away the “intimate time” the band had on this trip. By being a smaller group, the band was able to be more organized with their time and were, therefore, able to go to many more attractions.

“By the end of the trip, we all knew each other really well. All the chaperones knew all the things about the other chaperones,” said the band director, Chris Owen. “All the parents knew every kid’s name. So it was a lot more close knit.”