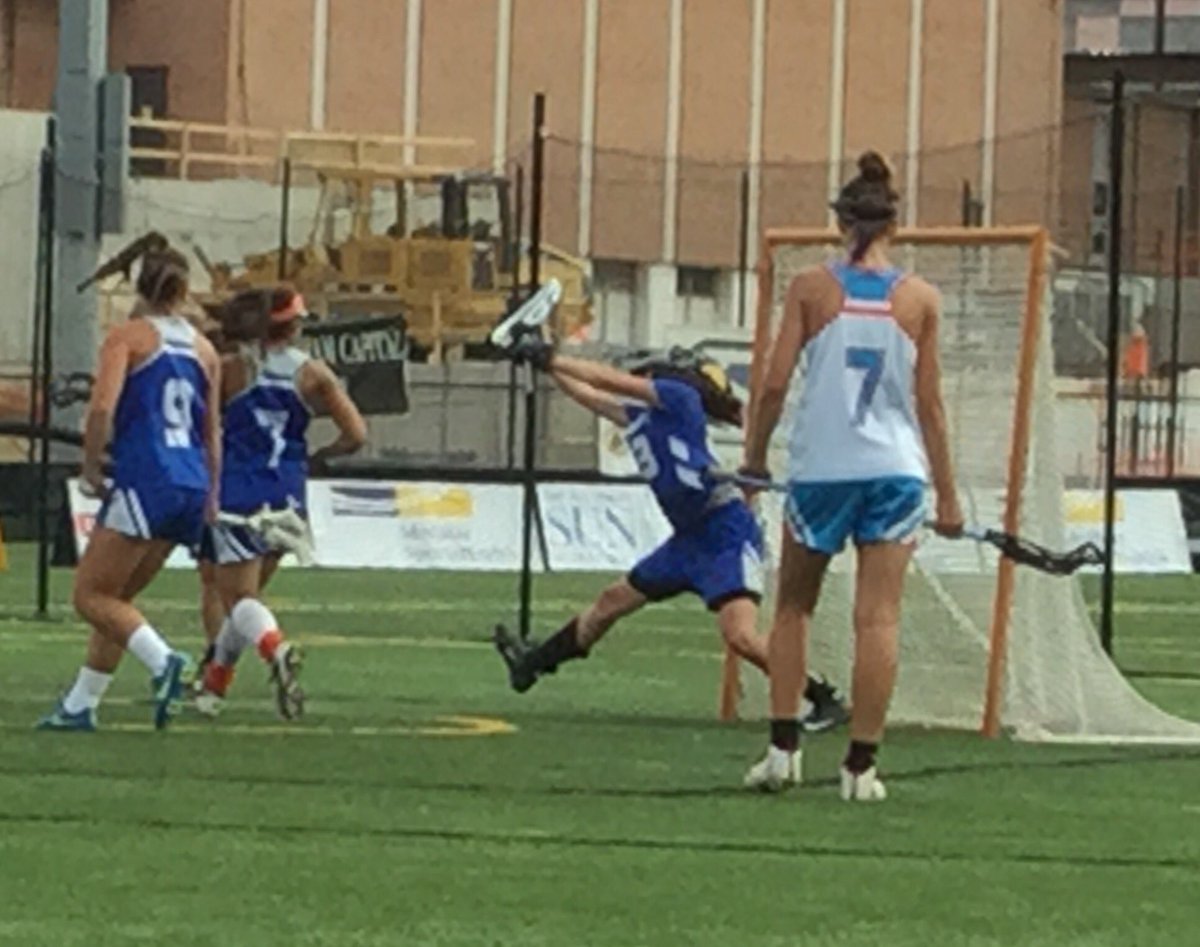 She straps her pads on and pulls on her helmet. She heads out to the field, in disguise and blends in with the other male teammates. She steps in front of the goal, grips her fingers around the lacrosse stick, and is ready to play.

After a successful game, the opposing coach comes over to say he was impressed by the goalie. He was then informed that the goalie was a girl.

Shaye Fitzpatrick is a sophomore here at Batavia High School. She started playing lacrosse in sixth grade. This will be her second year playing on Batavia’s lacrosse team, but the unique thing about her is she is the only girl on the team.

“It was really cool to be the only girl on the team,” she said. “They were really cool about it. Of course, it was probably weird for them at first, but they didn’t make me feel left out or uncomfortable at all.”

When she is not playing for Batavia, she plays for True Lacrosse, a premier club team for girls in the Chicagoland area. As a goalie on both teams, she goes through some pain. This is what comes with the job of being the goalie. Besides the black and blue marks, “I have never been injured badly,” Fitzpatrick said.

Injuries come with the responsibilities of being goalie, but she says that “the hardest thing about playing lacrosse is pushing your limits. To be a better lacrosse player and athlete you can have a limit, but you can’t stop at that limit. You need to be able to push that limit as far as you can to be the best player you can.”

Lacrosse has created many memories for her over the years, filled with laughs, friends, and travel. She says her favorite memory “in lacrosse is not just one specific memory but it’s many. When I travel with my girls team we’re so close both on the field and off. We support each other and celebrate together when we pull off big wins and that feeling of family is the best.”

At one of her lessons, the lacrosse ball rebounded from her grassy cleat, spinning upward, all in a single moment. The ball then shot over the players, their eyes watching it, and flew to the other side of the field. Shaye “made an amazing foot save,” said Jordan Majka, one her coaches.

Fitzpatrick is also an excellent student, according to teachers. “

Her personality is always positive both on the field and in class.

“Whether it is explaining a problem to another student or encouraging a classmate to persevere through a problem, Shaye is one of those people you want around you when the going gets tough,” Fricke said.

Fitzpatrick’s mother shared why her daughter joined the team saying “she has many talented teammates that made their varsity teams across Chicago and Shaye wanted to keep her skills sharp during the club off season.”

Both of Fitzpatrick’s parents supported her when she wanted to join the team. Her mother also said the team was very welcoming and “allowed her to just play the sport as any other teammate.” She describes boys’ lacrosse as a very fast-paced game.

“She is also one of the only reasons we don’t get killed every game,” Bergsieker said.

Coach Vasiliki Barakos, an assistant coach at Aurora University who Fitzpatrick takes lessons from, also shared a few words about her. She described her as “the athlete every coach wants. She is inherently driven, motivated and extremely gifted with her athleticism.” She also called Fitzpatrick humble and well mannered.

“One of my favorite qualities Shaye possesses is her relentless desire to gain knowledge and perfect technical skill. She never seems satisfied and that hunger will take her great places!” Barakos said.

Anyone who plays a sport understands the dedication, the balance between sports and school, the mental and physical strength, and the amount of growth that occurs over the years. Fitzpatrick’s favorite thing about playing lacrosse is that she gets a break from school and stress.

“You get to be competitive with a team of people that work just as hard as you which makes it so much more fun.”