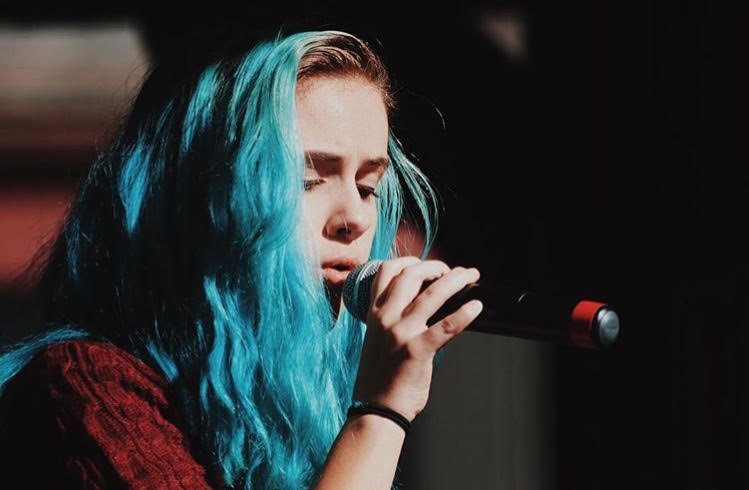 The shuffling and mumbling of the audience rings in your ear as you’re anxiously waiting backstage. You’re heart is beating at rates you never knew possible as your hands are balled into the tightest fist. As a techy hands you a mic wishing you good luck, a metallic voice announces to the crowd your name. A million what if questions race in your head but all disappear when the first chord is played.

This is a common feeling for 14-year-old Julianna (JJ) Burke.

Burke is an aspiring singer/songwriter who is climbing her way to the top. With an EP dropping in the next year or two, Burke hopes to move others with her voice and lyrics.

Music has always been a big part in Burke’s life.

“I first started singing in Kindergarten and started writing my own lyrics in fourth grade,” said Burke. “I loved it. I was afraid to sing in front of people however. I wouldn’t even sing to my mom.”

Luckily after a fifth grade performance, Burke fell in love with performing.

“All I’ve ever wanted to do since then was sing for people.”

“I feel like a proud mom seeing her up on stage,” said Burke’s biggest fan and friend Elizabeth Shiver. “I love and support her always.”

When Burke was asked what music meant to her, it took her no time to respond: “Music is everything to me. I practically live within music, and I don’t know what my life would be like without it.”

In mid 2016 Burke was fortunate enough to score a recording deal with Hix Bros allowing her to create and produce her own music. Burke has been working hard on her soon to be released EP.

“Producing music and planning events around it while still going to school is a difficult process,” Burke said. “Each song takes about two and-a-half months to fully make and I still have three songs left to record/produce.”

Burke hopes for her EP to be released before her birthday (January 18) in 2018. While this date is almost two years away you can still listen to her music by buying her single Close Enough, which will be available for purchase on Dec. 16, 2016.

Ten years from now Burke hopes to be traveling with her music and crew around the world.

“If I’m not touring I hope that I’m still writing music and in school getting a degree in songwriting and producing.”

Burke’s dedication and hard work shines through her music, and she hopes to inspire other aspiring singer/songwriters to go and chase their dreams.

“I cannot see myself doing anything but music, and hopefully it ends up that way.”