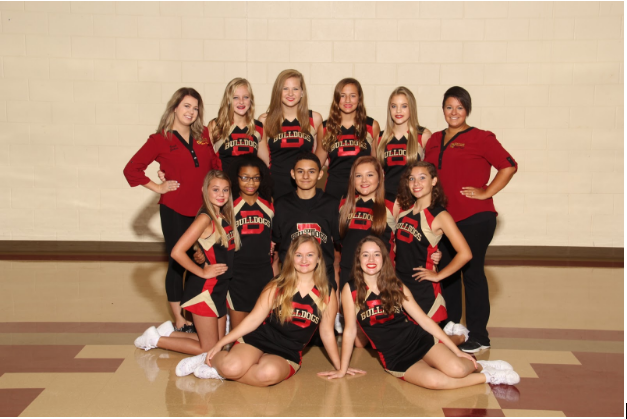 Head injuries; a scary concept for all, but a reality for Freshman Junior Varsity cheerleader Caty Burken. One day about two months ago a fluke accident caused her to suffer her first serious injury – a concussion. Even after going through such a scary experience, Burken doesn’t let it stop her and continues to cheer with enthusiasm.

After suffering an injury like a concussion, athletes commonly take a step back from their sport and take a break because they’re scared of getting injured again. This wasn’t the case with Burken. Her road to recovery was quick, and she got back to cheering as soon as possible, as she said she just couldn’t live without it.

It all started about two months ago. As a girl was performing a stunt, something went wrong and she began to fall. Burken felt a sudden weight on her, forcing her to the ground. As she fell, the room whirled around her. She landed on the floor as she knocked her head into it.

“I was very confused, I only thought it was a headache,” Burken said about how she felt in the moments after she fell. “I did not even think of it being a concussion until it did not go away for multiple days.”

The symptoms were the scary part for Caty’s mother, too.

“She [Caty] seemed much more serious than other times, and her symptoms would not go away which was concerning,” said Burken’s mother.

A pit of dread formed in Burken’s stomach as she heard the words “You have a concussion.” Her main concern when she found out she had a concussion was her teammates. She didn’t want to drag them down.

“I was very unhappy because I did not want to let my team down and take away from the time when had to practice and prepare for our upcoming events,” Burken said.

Injuries of one teammate affect everyone on the team, too.

“Since cheer is such a team-oriented sport, injuries affect the ability of a stunt group to perform, and the whole team’s routine overall,” said Molly Fulton, a junior at BHS and a varsity cheerleader, who has been cheering since freshman year. “It adds more pressure and stress to those who are not injured because they often have to word with new people or make last minute changes and still have to go out and perform their best.”

Alongside affecting her fellow teammates, Burken’s concussion affected her friends and family, too.

Her family felt the affects of her concussion, too.

“It just made us all very worried. It is very scaring when your child has a head injury,” Burken’s mother said.

Although it only took Burken three to four weeks to recover and return to cheer, it was pain ridden. Just imagine having trouble concentrating, constantly having a headache, and being in even worse pain when exposed to loud noises or bright lighting. Then imagine having to deal with that for three to four weeks while continuing on with everyday life. This is what Burken’s life was like during her recovery.

However, dealing with all of this has not changed Burken’s attitude on cheer, nor does it bother her anymore. “It does not affect me anymore, I haven’t had any symptoms since I was cleared,” Burken said.

Through her concussion, Burken maintained her love for cheer and doesn’t let her injury get her down. Quitting isn’t an option, despite the risk.

“Cheer is the sport I’ve always done and I don’t want to quit, even though the injury risk is so high,” Burken said. “I’ve always loved cheer and could never give it up. My life would change [if] I wouldn’t have something so important to me.”