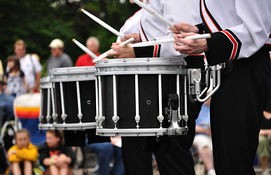 The drums pound, their loud sound ringing through the air. It echoes around the room, the beats growing into a song. The drum line participates in several competitions and performs many times. The season of drum line is currently not going on, but the students involved, including Chahmirzadi, have great memories of the past season. She balances marching band with her schoolwork during the season, and focuses on her schoolwork while off-season. One of Chahmirzadi’s fondest memories from last season was the pep assembly. The drumline performed in front of the school, along with several other groups and sports.

The drum line got to personalize and work on their own routine.

“We really got the freedom to be creative with what we did and just have a lot of fun with what we were doing,” Chahmirzadi said.

The independence given to the students let them create a fun, active routine. The drums and confetti gave a party-like feeling to the assembly, making students cheer and watch avidly.

“I thought it was awesome that the drumline got a chance to be featured in front of the entire school, and I think they seized that opportunity and did a great job,” said freshman Julia Pelech.

Chahmirzadi and her friends made an impressive display and a performance that many people enjoyed and admired.

The drum line revolves around the gym rapidly, holding up their heavy instruments and working to keep their posture straight. Chahmirzadi and the other kids on drumline must memorize their songs before performing them. While this is difficult, it is a necessary part of drum line.

Memorization is important because of the movement and mobility drum line requires. The group moves around the gym or outdoors, rendering them unable to carry music sheets. If the sheets blew away or were dropped, the papers would be useless, anyway.

Chahmirzadi has memorized songs before. She said she would “sit down and play through small sections of the music over and over again until I could play them without music, and then I would start putting them together.”

The repetition helped Chahmirzadi remember pieces so that she and the rest of drumline could perform them. It is a common technique for many music students, and one of the most effective.

There are also group practices, which Chahmirzadi enjoys. The drumline usually practices about two hours a day during the season. If there wasn’t a competition on Saturdays, they would have practices for up to eight hours, from 9 am to 5 pm.

The 9 am to 5 pm practices are also used for band camp at the end of summer. The band camp lasts for the final three weeks of summer, and gives music students a chance to learn more about their instruments and performances.

Chamirzadi, is part of an exciting part of band. She has been participated in drum line, and will grow and change throughout her high school career.