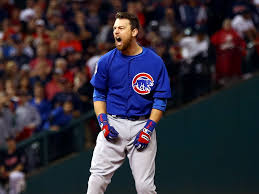 There were many players on the Chicago Cubs that played well during the 2016 season. Overall, the team did amazing considering that they won their first World Series in 108 years. But there were some individual players that helped the team stride to victory, especially players like Javier Baez, Kris Bryant, and Ben Zobrist.

Kris Bryant is a key star for many reasons. He led the team in home runs with 39. He also had 102 runs driven in,  121 runs scored,  176 hits. Even though Kris Bryant led the team in stats, there were other players that didn’t have amazing stats but ok stats, that contributed significantly to the team.

Javier Baez had a great season this year. It was only his second year in the majors and overall he contributed greatly but mostly helped out in the playoffs. It wasn’t stats that Baez contributed, even though he did have 115 hits over the course of the 2016 season. Baez made many great plays during the the 2016 postseason. He mostly helped David Ross and Willson Contreras throw out many players from the Giants and the Dodgers. Baez also made groundouts and made the throw outs the Anthony Rizzo. It wasn’t only Baez making great plays, however, it was also Ben Zobrist.

Ben Zobrist played in left field for the 2016 postseason. It wasn’t his defense that helped the Cubs however, it was his offense. In Game six of the World Series, he was on first base at the time when Addison Russell doubled into center. The Indians threw home to get Zobrist out, however, Zobrist plowed into the Catcher, Roberto Perez, and scored. Then in Game seven, he hit a double to left field that drove in Albert Almora and sent Rizzo to third base.

Overall in the 2016 season, the Cubs played really well. They won 103 games and only lost 58. The three players that were really committed to the Cubs’ victory were Ben Zobrist, Javier Baez, and Kris Bryant. Kris Bryant helped the Cubs get to the postseason with all the home runs, RBIs and Runs scored. Javier Baez helped out on the defensive side throughout the year but mostly in the postseason. While Ben Zobrist, starred mostly in the postseason on the offense. The Chicago Cubs earned their World Series victory in 2016, and these three players helped out a lot.