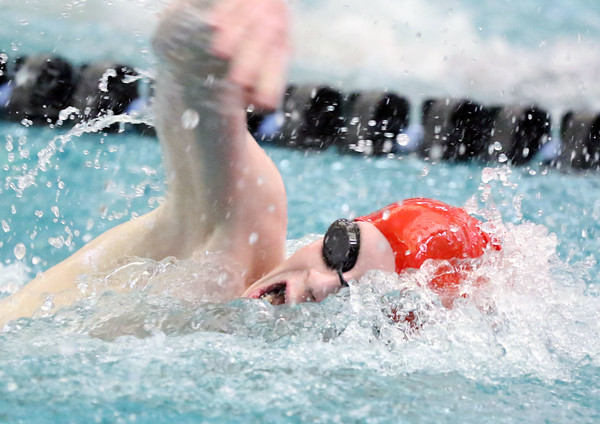 Last year’s outcome has motivated Hawkins to come back this season as an even stronger swimmer. This upcoming season is filled with new beginnings and new goals for himself and the team. While hoping to gain recognition for the high school swim team and improve in each practice, Hawkins said he and the team are more motivated than ever.

Hawkins has always had a passion for swimming. He is a dedicated athlete and a devoted captain. While Hawkins may be the captain of the team, he doesn’t see himself that way.

“My role as captain revolves mostly around communication,” he said. “I am the go-to person for details about meets, reminders about practice, dress code etc. While I don’t see it as part of being captain, my role on the team as an experienced swimmer is to teach and encourage others about the strokes and turns and dives. I see that as my responsibility as a swimmer and team member not just because I’m captain. As far as practices and meets, we all are very encouraging and cheer for each other and work together to make the team better and stronger.”

But while Hawkins may see himself as just another swimmer, his teammates admire him. They look up to Hawkins as the most experienced and most encouraging.

“I view the captain of our team as the leader and the one who knows the most,” said sophomore teammate Garret Sims.

“Keegan is a good leader because he leads by example,” said former teammate and current BHS senior Anton Alley. “He works hard during practices and follows the coach’s plans. He knows what he’s doing and he helps the new kids.”

His coaches also think very highly of him and admire how he steps up under pressure to face the competition.

“Keegan has always been very competitive,” said coach Nicole Luedtke “He uses the more difficult times he may go through to motivate him to further improve. He is quite good at analyzing how a race went and what he needs to change in order to improve. If anything else he uses the struggles to motivate himself for the next race. When he is successful he shares in that success with the entire team, part of what makes him a great leader.”

Hawkins sets the bar high for himself when he swims and makes sure he reaches it by practicing every day after school from 3-6:30 and on Saturday from 7-10. Over the course of the season, he swims 6,000 yards a day on average, which is over 3.5 miles per day. The workload helps him significantly decrease his times as he works his way back to the state meet. He has high expectations for himself along with the rest of the team.

“My goals for the team this year are to get everybody doing the four strokes and stroke turns and diving in,” he said. “We have a wide range of experience on the team so we have people who are year-round club swimmers, and we have people who just swim for fun during the summer. Swimming is a very technical sport. It would be great to get everybody to be able to swim legally in all four strokes and turns. Personally, my goal is to make state again but also make finals at state.”

The swim team has a strong bond that helps others swimmers be motivated to do their best and makes the experience fun for everyone.

“My favorite part of swimming last year was the group of guys that were on the team,” he said. “It is a great group and it’s a good time.”