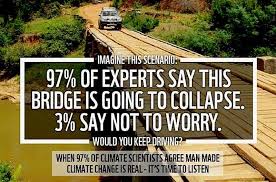 Yes, the biggest controversy of this day and age is global warming and climate change. And there are myths galore about it. In everything from politics to scientists, this is the list of the Top five global warming myths. But before we dive into it, one clarification needs to be made. When people refer to global warming, they aren’t talking about all of the greenhouse gases released into the atmosphere. They’re talking about the unnatural man-made global warming. In this, it’s the same. Organisms breathing is not included in this. With that out of the way, let’s dive right into this issue and get to the core truth!

1. Global warming is a big hoax

Some people do think that. Some even go as far to say that it’s a hoax created by China (not pointing fingers, President Trump). However, there is more scientific evidence about it than can be suppressed.

And that’s not all! You can even check it out for yourself! It’s easy to look up the information, so what’s stopping you from figuring it out for yourself? The overwhelming amount of data you will find will give you the truth above what others say.”

2. Global warming has been happening for millions of years and us doing what we’re doing isn’t going to change that.

If you’re still thinking this after what was said in the intro, you’ve got a lot of faith to continue reading. Otherwise, you’re just reading to say that this is all a lie. Anyways, yes, global warming and cooling have been around for millions of years, if not longer. However, all of those cycles were natural processes that happened over a longer period of time. The natural cycle is important, but what we’re doing is affecting it greatly. We cut down trees, lowering the amount of carbon that can be absorbed and we also release a lot more carbon that isn’t being absorbed. The oceans are huge carbon sinks but are becoming far, far more acidic because they are absorbing the excess carbon. Organisms can’t adapt quickly enough and are soon going to become extinct if global warming is allowed to continue. Any way you slice it, we’ve been affecting it.

Good question! In the last Ice Age, the difference in temperature was a measly 4 or 5 degrees Celsius. And keep this in mind: That tiny, minuscule difference was miles of ice over the globe and the water level being 100 meters lower than today. For us Americans, that’s over 300 feet of water! And you still want to say that a few degrees isn’t anything? We’re already .4 Celsius above where we were in 1998. That’s a big increase for only 20 years!

4. If there’s global warming, then why is it so cold?

As stated, global warming and cooling have been around for millions of years. But there’s more to the story. Being a natural cycle, the Earth goes through bouts of warmth and cold, the cold being Ice Ages. But, global warming doesn’t just cause warming. No, it can also propagate global climate change! And then there’s the fact that fluctuations are possible, but the overall is going up! Overall ground temperatures are rapidly escalating and could reach critical levels within 20 years! I don’t want to die in my thirties. Do you?

5. The Earth is taking care of it, so why should we?

The Earth is trying to take care of it, but this attempt at treatment has disastrous consequences. The oceans are huge carbon sinks, and they are absorbing thousands of pounds of carbon every day! That causes them to become acidic, damaging shellfish, seashells, and basically anything that uses calcium as a protectant. Entire species will be wiped clean! And then, as the oceans become more acidic, more species will go extinct. Fish, coral, turtles, you name it! Imagine all of them floating on top of the water, dead. And you still say that the Earth is taking care of it? Trees are supposed to take in carbon dioxide and turn it into oxygen. Where are these trees? Gone. Deforestation caused by us, humans, is leaving fewer and fewer trees for carbon to be absorbed with, further adding to the greenhouse effect.