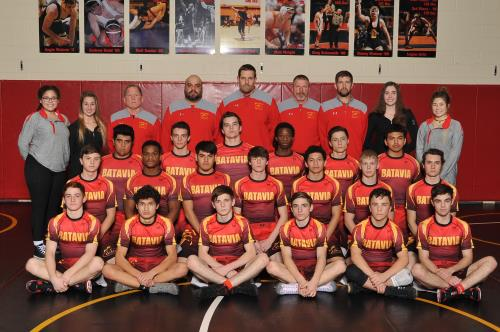 Scott Bayer is a head wrestling coach, assistant football coach and a history teacher at Batavia High School. The wrestling program’s featured home match, “ the event was held on Jan.11  on the stage in the auditorium at the Batavia High School under the lights against their rivals Geneva. With over 500 attending the match and Bayer spoke to the spectator about the A large crowd surrounded them roaring in their seats. This was an event that many residents and high school students went to see who will win in this face-off of rivals.  Showcasing this sport was said to be exciting not only to fellow students,  but residents as well. As Bayer had brought up, the players’ willingness to fight with dedication has helped them grab onto a great win that night of “The Big Event”.

GC: How many times a week of the upcoming event did your players practice? And how hard did everyone practice that week?

SB: “For the wrestlers, preparation for, “The Event” week is the same as every other week.  We had a 3 day (Mon-Wed) practice cycle with Thursday competition.  For us, it is just another dual meet – but with a significantly bigger crowd.”

GC: What did you and your players do to get into the mindset for the big event?

SB: “While the physical preparation for “The Event” was very similar to other Thursday competitions, there are undoubtedly some things we like to prepare our guys for.  As we moved the mats and set up, I had the guys walk the stage, get used to the lights, the look of the theatre space, the fog machine, the environment.  I just didn’t want them to be too overwhelmed by the production of the whole thing.  At the end of the “day,” it’s just a wrestling match, just like the hundreds they’ve already wrestled.”

GC: When you were down to Geneva, what did you and the players do in order to make a comeback?

SB: “All you can do is focus on what you can control.  A couple matches didn’t go our way, but guys try to remember that they cannot control what their teammates do out there.  If the guy before you goes out and has a bad match, you can’t do anything to win it for him.  All you can control is your match and your opponent”.

GC: Do you feel like having that big “roaring” crowd of people watching helped or made your wrestlers even more nervous?

SB: “Probably a little of both –  having a crowd there can get guys overly amped up and can also make them wrestle overly cautiously. In wrestling, it doesn’t really pay off to get overly hyped or nervous.  It’s best to prepare to wrestle your best for every match – some butterflies, some positive self-talk and good vibes and we’re off.  People sometimes forget, we have a lot of experience going out there on our own and being the focal point.  It happens in every dual meet.”

GC: How do you feel you make a contribution as a coach?

SB: “I just try to have guys focus on their familiar pre-match routines: eating the right things after weigh in, positive visualization, a solid warm up.  All I can really do is foster the right environment for those things.”

GC: What do you enjoy most about coaching?

SB: “Helping guys reach their goals and watching them transform their lives through the sport.  If I’m doing that, I’m the wealthiest man alive.”

GC: What motivates you as a coach?

SB: “My guys’ willingness to fight, their desire, their goals and their drive to get better.  As a former wrestler, I know what this sport did for me.  I’ve always told myself that if I could give 1/10th of what my coaches and this sport gave me back to wrestlers. I will have been successful.”

GC: By “playing under the spotlights” did this help wrestlers become more excited?

SB: “It’s not really about that.  Showcasing this sport in a way that gets people in our community excited about it matters to me.  This sport is in trouble.  It’s one of the hardest things a high school athlete can do.  But I am a big believer that wrestling is an exciting spectator sport.  I want Batavia kids and parents to get excited about wrestling.  I want young athletes to consider the unparalleled thrill of getting their hand raised after claiming victory over an opponent in front of 1,000-plus people.  I do this to give our guys a chance to showcase their abilities, but it is even more important to me to put the sport of wrestling on the big stage.”

GC: Do you plan on having the event on the stage again next year?

SB: “Not sure it will be on the stage next season, but we plan on showcasing a dual meet every year. “The Event” will live on and continue to grow”.

GC: If you could change anything about the “Big Event” what would it be and why?

SB: “Not much. We’ll do something different and fun every year to keep it fresh.  The only thing I’d like to change is I’d like to keep pushing the envelope to get wrestling in front of more people.”