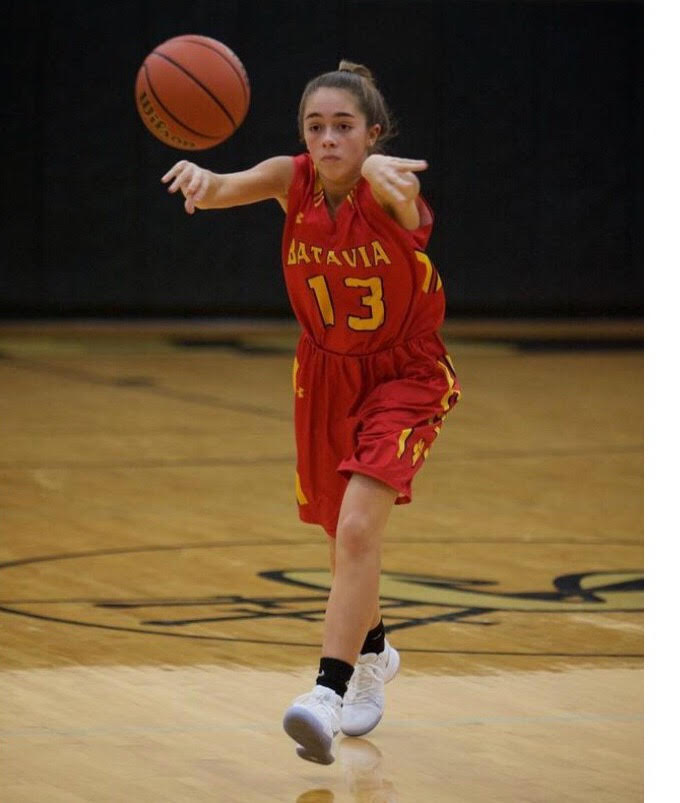 For many freshman athletes at Batavia High School, it’s a dream to be able to play a varsity sport. It takes a lot of hard work and motivation to reach the goal.  For some freshman, including Morgan Haug, the hard work paid off. Haug is a 5-foot-7-inch freshman, the only freshman on the Batavia Varsity Girls’ Basketball Team. Haug is number 13 and plays point guard and sometimes wing. Haug has played in 18 games so far this season and has 32 points. Haug recently met with The Spectator to talk about what it’s like to be a freshman on varsity

The Spectator: What other sports or clubs are you apart of or plan on joining in high school?

Haug: “This year I played tennis in the fall and am currently playing basketball for the school as well. I will also try out for soccer this upcoming spring season. I am not apart of any after-school clubs but will continue to keep an open mind.”

Q: How long have you been playing basketball?

Haug: “I started basketball in the fifth grade because my elementary school had an after-school league.”

Q: How did you feel going into the season as a freshman on varsity?

Haug: “Going into the season as a freshman on varsity, I was definitely nervous to be playing with girls who have a much faster speed of play. Although, during the summer I had the opportunity to practice with them, so I had a chance to recognize the difference between my previous team and varsity.”

Q: With some of your teammates who have also been in your position, have they given you any advice?

Haug: “My teammate Hailey Orman also made varsity as a freshman and she has continued to recognize my strengths and weaknesses. Throughout practice, she always reminds me to do more of something or less of something, if needed.”

Q: Who has helped you the most to get to this point?

Haug: “My dad has helped me the most to get to this point. After each one of my games, he would take me to the driveway and give me advice and assistance on my weaknesses he noticed in the game. He would show me different ways I could do better in the next game.”

Q: Has the team been welcoming and open?

Haug: “My team has been very welcoming and positive throughout the season. They have had a very positive impact on me.”

Q: With the team being a little smaller than normal, have you been getting a lot of playing time?

Haug: “In comparison to last year, I have definitely gotten a few more minutes of playing time than I would have gotten as a freshman on the team last year.”

Haug: “I look up to Erin Golden the most because just last year she was in my position as well and lacked playing time. Now, she is one of the starting five and leads the team in rebounding, points, and steals.”

Q: What are some goals you want to achieve in years to come?

Haug: “In the future, I hope to be one the starting five. I also hope to hold my position as point guard, as well.”

Q: What originally got you into basketball?

Haug: “In fifth grade, my teacher made me sign up for the after-school basketball league. I would have never considered playing basketball if he didn’t talk me into it.”

Q: Have you had any thought of playing in college?

Haug: “Being just a freshman, I have yet to consider whether or not I would wish to play college basketball.”