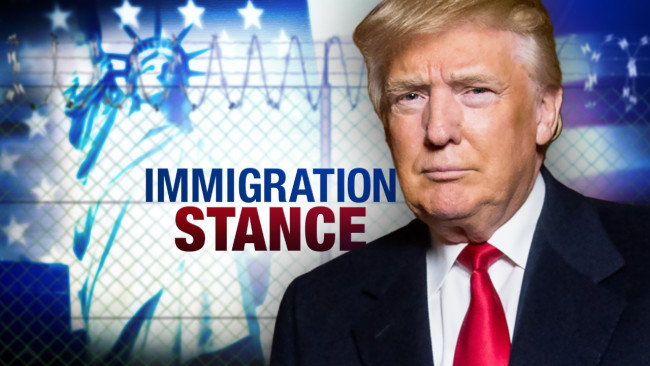 Immigration today is one of the most controversial  issues America is facing, with the Immigration and Customs Enforcement known as ICE with new rules giving illegal immigrants 48 hours to be deported after they are told they have to leave. These conditions are very unfair because they have very little time left to even get ready to make such a change.

On Jan. 25, President Trump signed a pair of executive orders that were promised to make border security safer. He has really cracked down on immigration giving ICE strict rules to not allow illegal immigrants stay no matter what social class or if they haven’t committed any crimes in our country. This has led to 41,300 arrests of undocumented immigrants nationwide, according to the Atlanta News. On March 5, the president said he wanted to send people referred to as Dreamers, young people who were illegally brought here, back across the border, but Democrats don’t agree with the idea.

The government seems like they won’t come to an agreement on what a correct place for them is so I think they should  give the Dreamers a more fair timeframe so they don’t feel like their losing everything. In my opinion i don’t believe they should even have to leave.

If Republicans can’t come to an agreement with Democrats then Trump will be forced to extend the deadline. A lot of people who’ve been living here their whole life, and even had a family here, who haven’t been convicted of any sort of crime or been a safety hazard to anyone, should be allowed to have more time to become legal, and not be pulled away from everything that was once their home.

For instance, Jorge Garcia who  lived in the United states for 30 years, tried year after year to be able to legally live here with the help of officials and his attorney, but the new enforcement law could no longer hold off his stay, sending him across the border for up to 10 years, separating him from his wife and two kids. These laws should have some sort of agreement or sympathy for families who have came here and done nothing but good to grow up in the country they have been happily living in.

Church leaders and advocacy groups feel opposed to immigration laws. Since immigration of undocumented people started rising, so did the amount of churches offering sanctuary to these people. Legally, no matter where these people take shelter, they can be arrested under any circumstance. These people are trying so hard to be able to stay here and now it seems like their voice means nothing, and even so they would have to leave and it would take years to come back. For things to be fair, they should have programs for all ages, especially old people who have set their whole life up here with the family, a job, and income, which would all get pulled away.

Lots of people say its bad to have people who weren’t born in America here because of their children. I think that because we live in a free country you should be respectful but also choices like these should be up to you but it shouldn’t affect other people’s beliefs. It’s a very debatable topic and lots of people either feel really strong about letting them be here or some people think we need to get rid of all immigrants because they don’t earn the same as us who are legally here. I feel we should figure a way out to cooperate and let them stay here because it’s too long of a process for them to come back and it causes lots of problems.