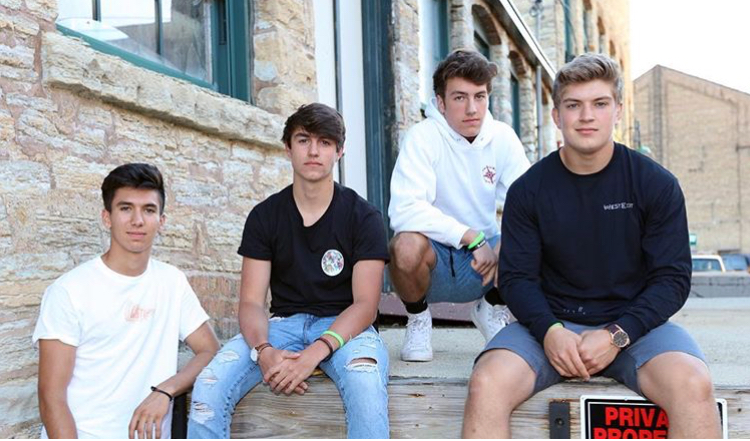 Students from Batavia High School came up with a brilliant clothing brand. Julian Davis, Joe Ruzicka, Michael Jansey, Jake Paoletti, and Connor Davis are the creative students who started this business. These five students showed us that anyone can bring their businesses to life

These five juniors put all their brains together and came up with the name: West Exit. West Exit features a diverse range of clothes, such as t-shirts, hats, hoodies, denim jackets, and many other types of apparel as well. Oh and let’s not forget their signature West Exit stickers that people from around the world want to purchase. “We don’t even have any stickers left, we shipped the last of them to people in Australia,” said Julian Davis. So their stickers have definitely helped them grow in popularity.

The future for West Exit is looking bright. They’re looking to expand globally along with making new designs for their clothes, as well. The head of West Exit, Julian Davis, had something to say about his vision for West Exit. He explained to me that one of their biggest goals for the future was to make this brand reach different countries. Not only would this increase their popularity but it will help them tremendously in sales as well. It’s also cool to think that kids who have no idea who the West Exit founders are are buying their clothes. They get to show off their brand in other settings.

“I want to take this brand globally,” said Julian Davis. “I think it’s awesome coming up with unique designs, creating them and then being able to see them spread and be worn by other kids who can relate to what you’re putting out there.” Davis and his team don’t create things to make money, they create different clothing for people who actually relate to these teens. So many of the same brands nowadays that people often forget to wear something that has a different meaning. That’s what makes West Exit so different from other companies.

Davis likes to create clothing that he thinks people can relate to. Being a young 17-year-old, Davis knows what teens want to wear, and so he comes up with unique designs that have a bigger meaning than just being on a shirt. Davis has an admiration for creating things, along with his West Exit buddies, too. All of them have different ideas and designs they want to put in their clothing. So when they all come together and share out their ideas it’s amazing to see what these kids end up coming up after all the thoughts our shared.

“I love creating and this brand is an awesome platform for that and just showing what kids are capable of,” said Julian Davis.

It really is amazing to see what these blooming minded teens are capable of coming up with. Plus, starting your own business at a young age can help you in the long run. Being able to expand off the things you create is beneficial, as well.

“We will definitely keep it going past high school, I don’t quit on stuff I like doing. I just want to see this company blow up and be known globally,” said Julian Davis.

“It’s an easy business to run and put on autopilot,” said Julian Davis.

Coming up with a business is never an easy task, but once you get everything together you can let the business do the work for you. After creating various products you can branch out from there and that’s exactly what West Exit did. It started out as an idea and then that idea turned into life.

West Exit, a student-owned business that is growing more and more every day. These five young entrepreneurs came up with such a unique idea that resembles their personality. Everything that they have created came from their thoughts, anytime people wear their clothes, they are wearing something that these kids work so hard on. West Exit has also started a spark for other student entrepreneurs who want start their own businesses. From seeing what these students can accomplish, people now know they can do anything they set their mind to. Anyone who puts in the time and work can bring their businesses to life, and these five young men showed us this.