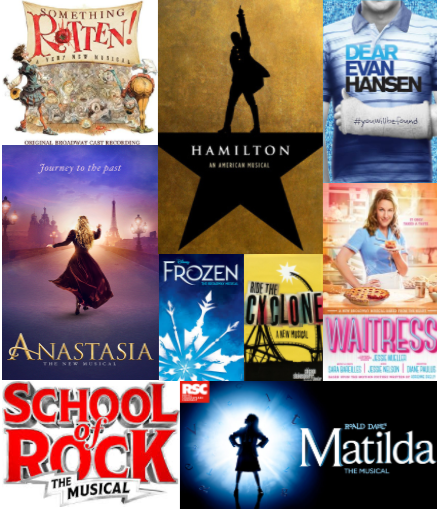 Based off one of the most box-office breaking Disney princess movies, Frozen the musical is coming to Broadway in 2018. This is a story about two orphaned princess sisters, one with magical ice powers (Elsa) and one just looking for adventure (Anna), who fall into trouble when Elsa accidentally causes summer to turn into winter. Kristen Anderson-Lopez and Robert Lopez, who created Avenue-Q and Book of Mormon, wrote the original music for this adaption. Welcome Olaf, Elsa, Anna, and Kristoff to the live stage coming in February.

Come from Away is a new musical about a plane that is grounded because of the 9-11 attacks in New York. It focuses on the passengers and workers on the plane and how they learn of the attack and cope with it. It is a story of how when there is a time of crisis, people come together no matter what the barrier. Race, sexual orientation, or age doesn’t hinder people from feeling connected when their nation is attacked. This musical shows these subjects in a personal light. Nominated for a Tony in 2017 with songs written by Irene Sankoff and David Hein, Come from Away is one to see.

Ride the Cyclone opened in 2015 at the Chicago Shakespeare Theater. This musical was originally written for a Canadian improv group. This musical became so popular in Canada that Chicago Shakespeare Theater brought it to the United States. A black-box theater group from New York saw it at the Chicago Shakespeare Theater and brought it to New York City. Though not for everyone, Ride the Cyclone is a black-box musical consisting of about eight cast members. It is about a Canadian choral group who die on a roller coaster (the Cyclone). A fortune telling machine who narrates the musical gives every one of the members a chance to be brought back to life. Each choir member sings a song about their hopes, ambitions, and worldviews. Full of controversial issues, humor, and sympathy, this musical is a must see!

Based on the animated film from 1997, Anastasia came to the Broadway stage in 2017.  The story is about the Russian monarchy that fell into trouble with Rasputin, the villain. The young princess becomes an orphan and forgets that she is royalty. With the help of a young man named Dmitry, Anastasia finds out who she really is and reunites with her grandmother. With the musical workings of Lynn Ahrens and Stephen Flaherty, this musical is one to be watched.

Written and produced by an all-female team, Waitress is about a young baker and waitress, Jenna, who has big dreams of getting out of her small town and finding true love. With the help of her fellow waitresses, she enters a baking competition as a chance to start over. The New York Post raved, saying it was “A treat for all the senses” and it truly is. This hit musical opened on Broadway in 2016 and is still going strong. Allow yourself to be treated to this tasty musical ASAP!

School of Rock, on Broadway in 2015, is about a failing musical artist who becomes a teacher to pay his rent. After finding that his students are musically talented, he enters them into a “Battle of the Bands” competition. With all of their hopes on the line, viewers will have to watch to see if they can make it to the big time. With Andrew Lloyd Webber (Cats, Phantom of the Opera) as the composer, and Glenn Slater as the lyricist, this musical really rocks!

Tim Minchin writes the music for this 2013 adaption of Roald Dahl’s novel, Matilda. This show is about a girl who is abused at home by her uncaring parents. Throughout the musical, she discovers she has the ability to move things with her mind. These powers allow her to save her school from an evil headmistress and a young woman from her abusive aunt. This story about the imagination of children and the wonder of youth is a beautiful work of art. This musical is a must see!

With the music written by Karey and Wayne Fitzpatrick, this is the story of the first musical ever written- Omelette! During the Renaissance era in England, Nick Bottom wants to one-up Shakespeare by writing the next big thing.  He goes to a fortune teller to see what the next big production will be. The fortune teller sees a musical about omelettes! (Which suspiciously sounds like Hamlet) With the help of his brother and a few other hopeful souls, Omelette is produced, but boy, are the reviews not over easy! This light-hearted and hilarious musical alludes to many major musicals on Broadway today. Something Rotten will definitely leave theatergoers sunny side up!

The winner of a Grammy and Tony award, Dear Evan Hansen is about a boy just trying to fit in with his high school crowd while suffering from severe social anxiety. With the encouragement of his therapist, Evan writes letters to himself. These letters that weren’t meant to be shared with anyone get out and Evan must face the consequences. This is a classic coming-of-age musical. By following the story of Evan Hansen, people are reminded that life is not easy for everyone. The music and lyrics were written by the talented Pasek and Paul. This show helps everyone from every age to grow up again.

Finally, the musical that has swept the nation over and over again for two years, written and played by Lin Manuel Miranda, is Hamilton.  This show gives a new meaning to making history alive.This musical is about Alexander Hamilton, a founding father of America, and his story and influence in the United States government. With raps about peace, justice, and scandal, this show keeps viewers on their toes. Played by a person of color cast and using every music genre imaginable, this musical is diverse and even educational. With 11 Tonys and the Pulitzer Prize for Drama, Hamilton is one of the most groundbreaking musicals in the past 5 years. It is a must-see for all ages and places.