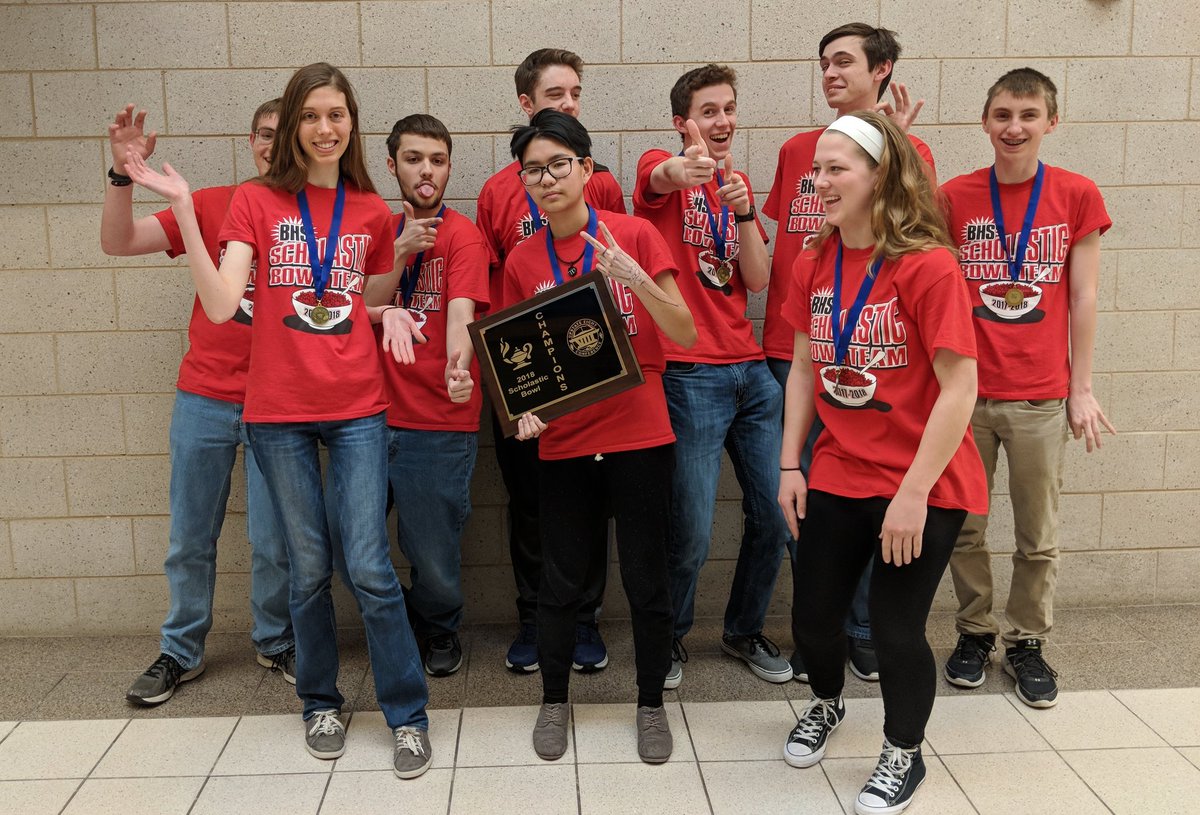 In just its third season, Batavia’s Scholastic Bowl team won the Upstate Eight Conference championship on Feb. 8 to stay unbeaten at 13-0 on the season. Two of the starters, Billy Dremel and Ava Langstaff, compiled the top two scores in the Conference.

For Conference and Regionals, teams can take up to 15 members. For Batavia’s team there was nine students – five starters and four alternates.

“The coaches are looking for a person who has a calm but authoritative presence,” said English teacher and head coach Kim Pearlman about choosing Nora Carr as the team captain for the conference and regional meet. “This person helps keep the team focused, has to be strategic in passing play, and speaking for the team.  Nora is focused and calm- but she is definitely a leader who plays with intensity.”

At the start of the game the team usually starts with more experienced or confident players, however, they do rotate during multi-match play to give multiple people the opportunity to captain. Regionals is Monday, March 5 and the coaches believe they have targeted the team’s strengths and weaknesses and understand what they need to practice in order to thrive.

“This is definitely a team competition,” Dremel said. “You really have to rely on the knowledge and experience of your teammates every match if you want to be successful.”

According to Dremel, science is his best and favorite category.

“I spend a lot of time reading about science, and this is a nice way to pretend like it’s worth my time to do so.”

Behind the scenes of the Conference champions are the coaches Mrs. Pearlman, Ms. Jackson, and Ms. Ryterske. The coaches said that they are very confident in their players and enjoy working with them.

“The kids are fantastic! They have worked so hard over the past three years, and they have come so far from those beginning meets,” Pearlman said. “The team now spans freshmen through seniors, and they are incredibly welcoming but hard-working and driven.”

The team’s big competitors are Geneva, St. Charles East, and Glenbard East but Batavia coaches said that they are confident in the work they have done. The team meets up once a week on Mondays to practice.

“At practice, we do practice questions and matches,” Dremel said. “It’s difficult to study for. The questions are so broad and random. The practices mostly serve to get us used to the match format and buzzers and things like that.”

Categories in the Scholastic Bowl include history, math, science, literature, fine arts, pop culture, sports, and geography, among others. The game also includes a touch of luck when it comes down to the questions being asked.

“Students should stop by and come to practice if they’re interested,” Pearlman said.  “Sometimes students who are interested are intimidated by the types of questions and buzzing in – it’s fun.  It was fun to watch the incoming freshmen try it out at the Activity Fair.  We want to get the team out competing – that’s how you get better.”

The team is going to continue with the Scholastic Bowl vs Staff Meets for next year including a future competition with the DuKane Conference.

“I’ve joined a lot of clubs and quit when they stopped being fun, but this one stuck,” Dremel said. “I like it.”