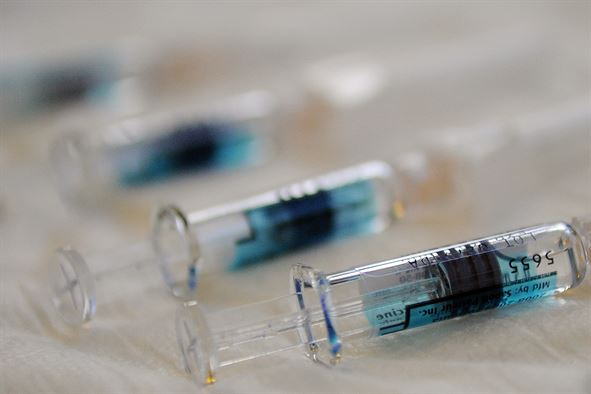 There are many diseases that have plagued schools throughout the 2017-2018 school year and one best watch out for them. However, there have been none as powerful in schools and the United States as the horrible disease of influenza (the flu). The flu is an atrocious disease that causes terrible symptoms such as pains, coughing, chills, congestion, dehydration, fatigue, and many other painful symptoms. With how bad the flu has become over the recent times, it has already caused over 63 deaths in children this year alone, and over 6 million children have been hospitalized for the disease. It is so prominent that 1 in every 13 doctor visits are for the flu or symptoms of it, matching the highest level of disease in the United States!

The reason that the flu has been so tremendously powerful this year is that it is a specific type of influenza called H3N2. This type of flu mutated from the same flu virus that consumed the nation in 1918 and the swine flu virus in 2009. The flu type of H1N1 mutated a while later and became a much more powerful disease that is quite prominent in hospitals today, H3N2. The H3N2 virus is likely even more dangerous to humans because we have not had too much exposure to it, meaning that it is much easier for the virus to penetrate one’s immune system. Even if vaccine makers did discover this virus before they created the vaccines for this year, they still would not have had time to make a vaccine to cure it due to the fact that the virus mutated as the vaccines were being incubated. The vaccine has been reported to only stop the H3N2 virus about 30 percent of the time.

Fortunately, there are some precautions that one can take to stay away from the H3N2 virus. First, you must get vaccinated. Even if there is only a 30 percent chance for the vaccine to work against the virus, there is still a better chance than none at all. The vaccines can also prevent many types of flu from getting into other people around you. If you still end up coming down with the virus or flu of any kind, there is a low chance that you will die. The flu is very rarely lethal in people with healthy bodies. Also, it is likely that you will be prescribed antivirals to stop the virus.

The flu is a very scary disease, but there are ways to avoid it and staying healthy is key. The H3N2 is especially terrifying, but with the right medical care and a healthy body, the sickness will soon end.