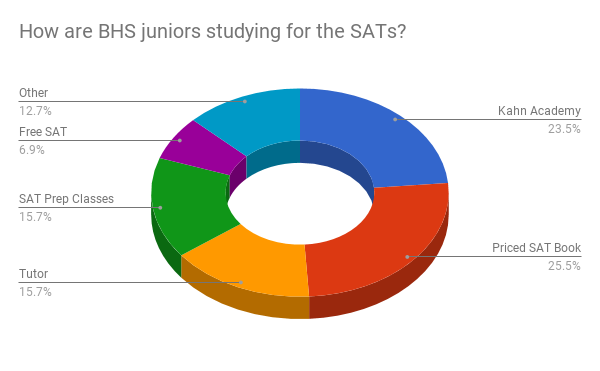 The SATs are coming up this April and there’s always a lot of questions about what is the best way to study for the SATs. Last week, The Spectator conducted a poll that asked 100 juniors how were they studying or planning to study for the upcoming SATs. The graph above illustrates the most common methods used by the 100 students.

The highest percentage students, over 25 percent, were practicing off an SAT book they bought. More than 23 percent were planning to use Khan Academy. The same amount of people (both over 15 percent) were either paying for SAT classes or hiring a tutor. A reported seven percent studied by taking multiple printable SATs found online and the remaining 12 percent had their own method that was not common among the rest of the 100 students.

“There is no right way to prepare for the test,” said Corey Bernard who is a junior and senior guidance counselor at Batavia High School. “There are prep books you can buy, online resources, classes, individual tutoring, or they can use Khan Academy… It comes down to how much time and how much you want to put in financially.”

More than 25 percent of students had bought a book online or from bookstores such as Barnes and Noble. Paige Lundborg, a junior at Batavia High School, reported that she bought her book from Amazon for around 20 dollars. Books on websites such as PrepScholar or Barnes and Noble also are priced around 20 dollars. Students reported that the books provide sample tests and tips and it is completely up to them as to what pace they want to go at.

Another popular option was Khan Academy, which is a free website emailed to the students to help them study. On the Khan Academy free SAT practice site, it can upload the student’s most previous PSAT score and provide practice solely based on the individual’s areas of weakness. There are videos and guided practices, too.

“Although we do promote this [Khan Academy] and we send emails out, most students do not sign up for Khan Academy,” Bernard said. “But it’s free and right at your fingertips. We see students jump right to individual tutoring and putting a lot of money into that and doing group classes but they skip this piece that’s free.”

About 15 percent are currently paying 305 dollars for an eight-week course provided by Excel Edge at BHS Over 100 students are currently enrolled and they come after school every Wednesday. Another 15.7 percent are paying to see an individual tutor. For example, Abigail Solano said that she sees a tutor once a week and an hour each time. She said her tutor is paid at the rate of $30 per hour.

“A tutor is helpful because they know how to be successful on the test. They’ve already taken it and done well,” Solano said.

However, both the class and the tutor are costly. For some students, it is not worth the money so they prefer a cheaper alternative.

“It’s a family decision,” Bernard said of spending money on tutoring. “But something I always recommend to my students is to look ahead. What kind of schools are you interested in applying to? Have a few in mind, look on their websites. What’s their average SAT score or GPA? And depending on that, are you on target? And if you’re right on target, you may not need to invest money. If you’re aiming for a highly selective school and your scores are not there yet, then yes, you might need to prep for it more.”

Around seven percent of the hundred students are finding free printable SAT practice tests online and taking advantage of that. On College Board’s website, they provide an answer key and a rationale for every answer.

The remaining 12 percent are using an alternative method that was not commonly heard of. For instance, Geddy Rerko, another junior at the school, uses an app called Daily SAT Practice. According to Rerko, it generates an SAT question every day for her to answer. Other students are simply looking for tips and strategies online.

“In my opinion, one of the best ways is to just practice,” Bernard said. “The more questions and tests you do, the more comfortable you get. It’s all about going into the SATs feeling confident and knowing you did everything you could to prepare for it.”