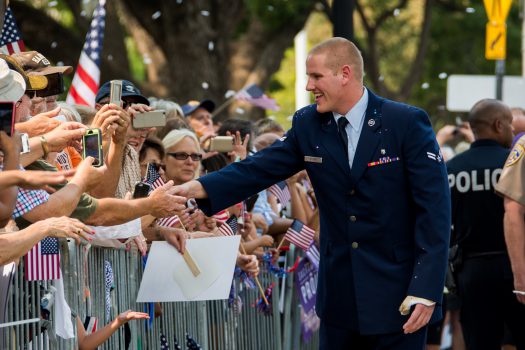 One shooter. Two guns. Three best friends instantly becoming heroes. 15:17 to Paris is based off of the true story of the 2015 Thalys train terrorist attack in France. Released Feb. 9, this inspiring movie has already reeled in 28 million dollars.

15:17 to Paris follows the story of the three American men, Spencer Stone, Alek Skarlatos, and Anthony Sadler, who stopped the shooter on that one life-changing afternoon. Each of them plays themselves. However, the film doesn’t just take place the day of the attack, but instead it alternates between the train and the boys’ home lives.

The story follows the boys as they grow up together and bond over their interest in guns and also their trips to the principal’s office at their private school. Over the course of the film, the trio can be described as misfits as they are often bullied and told by even their principal, that they will never accomplish anything in life. The only one who believes in them is their teacher, which makes the film that much better because rooting for the underdog has always made films more appealing.

The audience can’t help but feel proud for Skarlatos when he joins the Army and for Stone when he finally gets accepted in the Air Force. From there, the story focuses more on Stone and his continual struggles. Like in high school, he repeatedly finds himself in trouble, but as the film goes on and he grows up, Stone’s quirky character ends up helping him out tremendously as he becomes more and more accepted and respected.

For all three of the stars to have very little experience in acting, Clint Eastwood did a good job working with them and I was pleasantly surprised. There were moments that I felt a scene would have been better had it been done by a professional actor, but overall, the acting was a lot better than I expected. The three did a great job developing their characters and were very likeable. I felt like I knew each of them personally and had made three new best friends when I left the theater.

In one of the final scenes of the movie, the acting was the last thing on my mind. Because the film was based off  a true story, I had gone into the movie theater knowing what the ending would be. However, I wasn’t skeptical and was excited to see what it would be like. The switching of scenes throughout the film from the train attack to the boys lives made the ending even more intense. The entire movie I had been awaiting the final, inevitable scene that the entire film was centered around and when it finally came, it had me on the edge of my seat and literally yelling at the screen, even though I knew there would be a happy ending.

I would recommend 15:17 to Paris for all teens through adults. I was disappointed when I was the only person under 30 in the theater because I thought the movie had a really good message for young viewers like overcoming challenges and finding out who you are, especially for teens in high school, which can be a hard time. This movie had an inspiring message behind the grim and sensitive scenario of a terrorist attack. Since there was a lot of “proving people wrong” and “rising to the challenge” this movie had an unexpected feel-good theme to it and I would give it a 9/10.