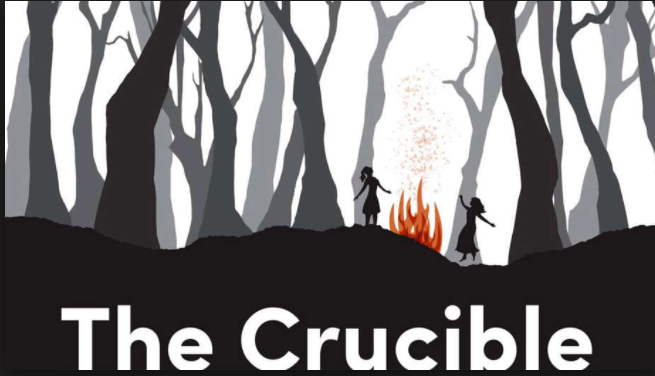 The Crucible, written by Arthur Miller, was put on by Steppenwolf theatre in October. This play about the Salem Witch trials fit perfectly into their black box theater setting. The director, Jonathan Berry, brilliantly adapted this production to really strip the characters relationships and motives raw.

The main character, Abby Williams (Naima Hebrail Kidjo), accuses Elizabeth Proctor (Kristina Valada-Viars) of being a witch. Elizabeth Proctor also happens to be John Proctor’s (Travis Knight) wife. John used to be in an affair with Abby and when he broke it off, she was determined to get revenge. Abby pretends she is possessed to prove to the already scared and paranoid judge that Elizabeth should be condemned. This play beautifully portrays the feelings of revenge and how no good deed goes unpunished. By adding artistic contrast to the stiffly worded play through dance, this production is visibly and audibly beautiful.

This play also explores the topics of how a lie can go too far, believing the innocence of youth is ignorant, and how relationships can survive even through death and pride. The company does a fantastic job of bringing the focus to the stage and the dialogue. The characters who are not in the scene sit on the side of the stage and watch what is happening in the spotlight. This is a well thought out effect because it brings your attention to the scene that is going on and it shows that people are always watching.

Their set is minimal and changes very rarely also. This also brings the attention to the characters on stage and makes the audience use their imagination.

This play has so many important themes and Berry puts them out in the open with the minimal set and staging designs. I would recommend seeing a play at Steppenwolf very soon, especially the play that is paired with The Crucible, titled Burn. I would 10/10 recommend this theatre, all of their productions, and mostly their production of The Crucible.