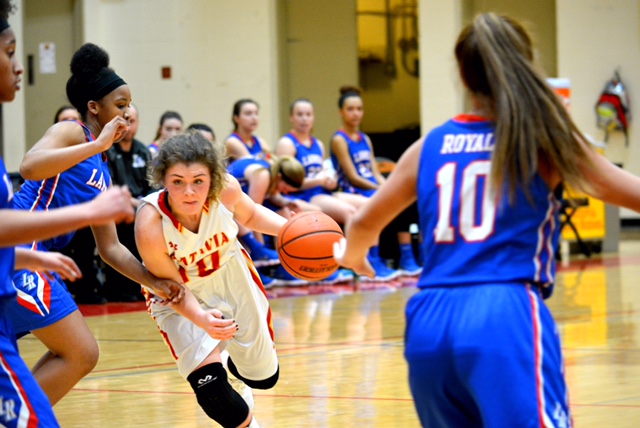 New school full of unfamiliar faces. New coaches with nearly 30 new plays to learn. Nine new teammates that she has to get to know. New fans screaming at the top of their lungs and eagerly watching her every move.

These are only a handful of the changes Paris Chaney had to deal with after leaving Aurora Christian to spend her senior year at Batavia. With so much change, it’s amazing that Chaney had the time to play varsity basketball this season while also being an honor roll student and a member of the club Christian Fellowship of Student Athletes.

Chaney has been passionate about basketball for a long time and it seems as if she was born to play the sport. Her dad was her first coach growing up and also coached the team at Aurora Christian, part of the reason her and her sister, Noelle Chaney, went there before transferring to Batavia.

Paris is also passionate about basketball because it’s a lot different than any other sports she’s participated in like cross country.

“It’s a lot more mental strength because there’s so many different elements like shooting, passing, and dribbling, versus in cross country, all you do is run,” she said.

When asked what it was like transferring to a new school and basketball team senior year, Paris was optimistic about the experience. “It had challenges but was rewarding towards the end because the girls were very accepting.”

In addition to accepting, when it came to her teammates, Paris also said that at first “I thought they were nuts. I was like what it wrong with these children?” But as the season went on Paris warmed up and also said “ … when I got to know them, I realized they were loving and caring and wonderful people.”

Her teammates also thought positively of the only senior on the team. They gave Paris the Bulldog Award at the end of the season, the award for most team spirit and for being a role model.

“Paris was a great addition to the team,” said her teammate Erin Golden. “She helped us so much on and off the court. She came in and blended well with the team like she had been with us the year before. It was awesome having a senior on the team and we were happy to celebrate her last year with her.”

Being the only senior on the team had its advantages for Paris. Although she’d enjoy the company of fellow seniors, she said “It wasn’t horrible” and joked that “everyone called me mom.”

Another advantage of being the only senior was senior night, despite the game being delayed a night and moved to Saturday because of a snow day. The long awaited night just for seniors was still perfect for her and she joked about it saying that “It was fun because it was all about me.” The gym was decked out in red and gold balloons along with streamers that spelled out “Paris.”

However, senior night was most likely not Paris’ last home game experience. She was excited to announce that she will continue her career in college, but where “ … is to be determined, I’ll either be playing at Hope or Wheaton College” she said. Both are division three schools. Wheaton is only a half hour from home, and Hope College is in Holland, Michigan.

When asked about how she feels about next year, Chaney said that “I am excited because it’s a new opportunity and a new start, again. But it’s also sad because I’m leaving Noelle.”

Paris will have no problem being in a new environment. The 2017-18 school year has gotten her used to the change, but something she’s not used to is being away from her sister who she has a very good relationship with.

Unlike this season, Noelle and Paris played together on the varsity team at Aurora Christian. Noelle, a member of the sophomore team, said that last season at ACS, her and her sister “… were the dynamic duo, I’d seal for her and she’d drive to the hoop. We were unstoppable and she really helped me throughout the year.”

Noelle also said that this season was a lot different and “I was disappointed that I didn’t get to play with Paris for her senior year, but I was so happy to see her finish out strong.”

Another difference between Aurora Christian basketball and Batavia basketball were the athletes. “Batavia has better competition and the girls on the team were more skilled, too,” Paris said. Last season at Aurora Christian, she started nearly every game, versus this season where she didn’t start as much.

The Christian aspect at Batavia was a lot different than it was at Aurora Christian too. “At ACS we focused on God more too. We played for the Lord and not for ourselves,” Paris said.

No matter where Paris played basketball, she made a huge difference on and off the court. She is a talented athlete with many accomplishments and no matter where she ends up playing next year, she will make an positive impact and continue to do great things.