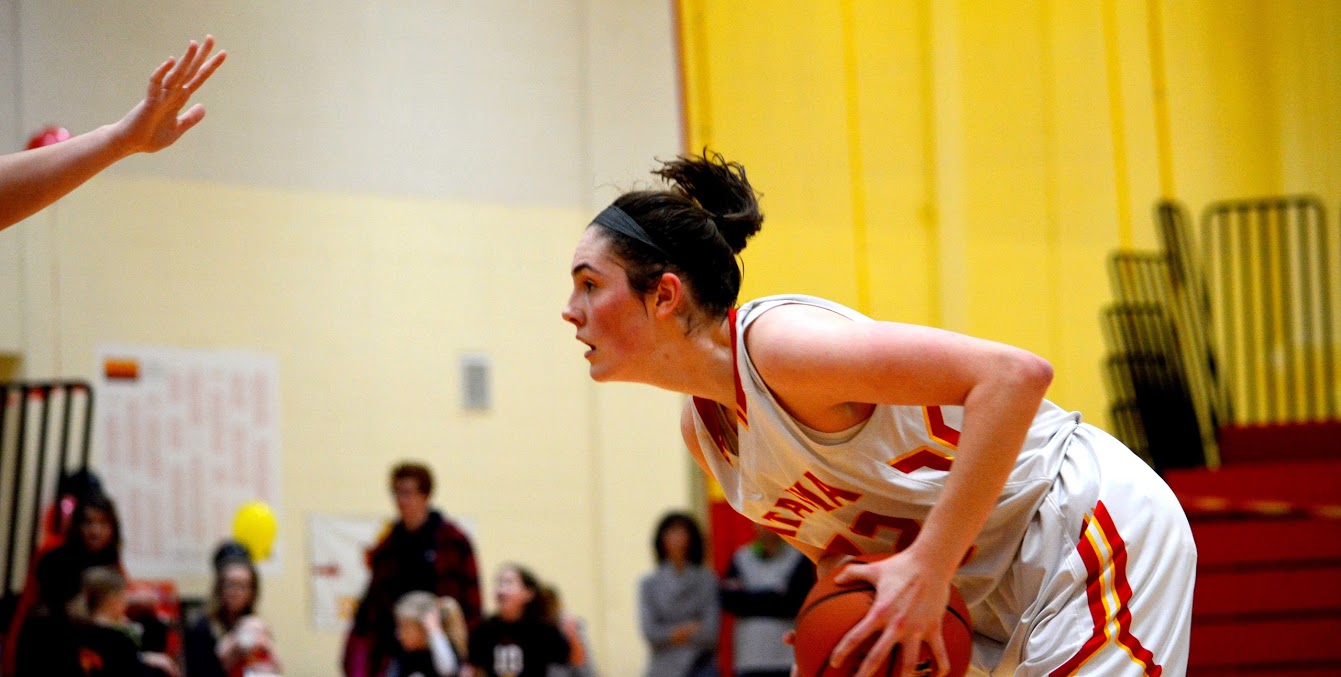 Geddy Rerko, a six-foot junior on the Batavia girls’ basketball team, has recently committed to play at Colgate University in New York. In fifth grade, she joined a park district team to start off a career that has now led her to become a Division-I player.

“I started because I wanted to try it and it would be another sport to play,” Rerko said. “I had been playing softball for many years and wanted to expand my horizons a bit. I enjoyed basketball and I wanted to try playing. I am very glad I decided to play.”

“I have noticed that Geddy plays like a true teammate,” Newberry said. “She takes shots when she should, but she also doesn’t hesitate to make an extra pass or help get someone else open for them to score.”

The countless sprints up and down the floor, thousands of shots put up, endless minutes working on skills, and hundreds upon hundreds of games played has all paid off for Rerko when she received the offer to play for Colgate.

“Geddy is always in the gym,” Newberry said. “She stays extra to shoot, she comes in during her free time to get some extra shots up, and I think that that has really helped her get where she is now.”

Rerko herself knows how much hard work she has done, and continues to do, that has taken her to the next level.

“It has taken a tremendous amount of work to be where I am,” Rerko said. “I have put in so many hours at practices with high school and AAU teams. In addition to practicing with the team, I have put in so much time with individual skill work. I spent days in the sun shooting in my driveway or coming in to shoot in a gym and get better. I have been a diligent worker and that paid off when [I] picked up a basketball.”

Not only is Rerko a hard worker on the court to better her basketball skills, but also a very hard worker when it comes to what matters just as much, school. She is in several honors and AP classes and maintains high grades in those classes.

“I have also had to spend countless hours doing homework and being successful in school because if I hadn’t, I would not have been accepted into Colgate,” Rerko said. “They have high academic standards, which is important to me and so I take school very seriously. School is just as important as basketball if not more.”

Rerko’s love and dedication to the game have led her to play almost all year round, with AAU season (Lady Lighting) in spring and summer to then playing for her high school team in part of fall and all of winter. Although basketball takes up such a big part of her life, Rerko cherishes so much of it.

“It has become an immense part of my life,” Rerko said. “I love spending the winter months with my team at practices and games. I give up a lot of time to play and be better. It means so much to me and especially now that it is a part of my future and my college experience, it is very important and a large part of my life.”

Rerko does so much to improve her basketball skills, but her skills and hard work rub off on others, making them better.

“Geddy’s talent on the court has affected our team in positive ways,” said Morgan Haug, Rerko’s teammate. “Geddy’s ability to always be focused and positive has led our team to do things we may not have been able to do without her focus on the game and her skill.”

While Haug notices her focus and talent, another teammate, Katherine Polick notices other attributes in Rerko that has improved the team.

Even though Rerko has been playing basketball for seven years, the thought of being able to play at the next level never really crossed her mind till recently.

“I would say it is more of a recent dream,” Rerko said. “I played both softball and basketball for a long time and it was difficult to balance both so I chose basketball. I really didn’t think that I would ever be given the opportunity to play at the next level because I honestly did not think I was good enough.”

Rerko is a Division-I athlete but she isn’t the type of person to brag to others about it. Instead, she continues to work hard and is thankful for what she has earned. Teammates Polick and Paris Chaney love playing with Rerko because of how humble she is.

“Geddy is very humble in the fact that she is D1, and is constantly complimenting others on their hard work and achievements,” Polick said. “It is very fun to be on a team with someone of that level.”

While Rerko is averaging 7 points a game along with 5 rebounds per game she still stays very humble and a great teammate.

“Geddy doesn’t like to emphasize that fact that she is D1, so playing with her if fun because she isn’t arrogant but a great teammate,” Chaney said.

No matter the game or practice, Geddy Rerko will always be the one to stay positive and energized. She’s not one to give up or hang her head when something goes wrong, and that’s what has gotten her to the point she is today and will lead her to do great things in the future.