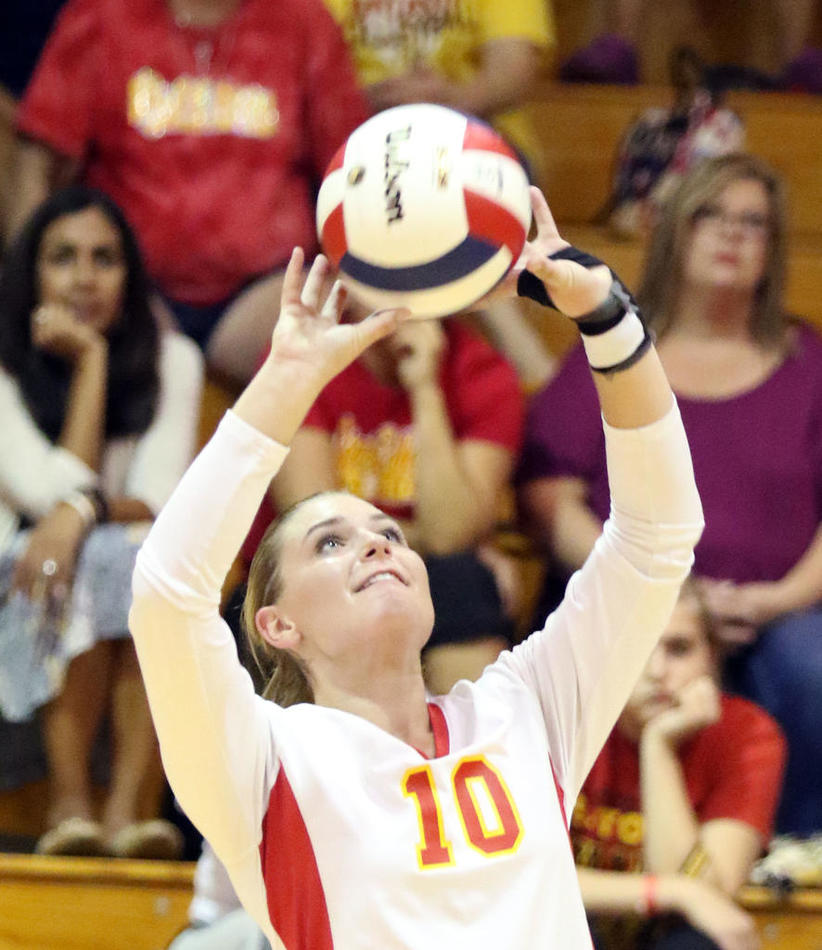 An anticipated crowd sits on uncomfortable bleachers for hours, wishing that one team would come out on top already. With matches like these being so close in score, there was absolutely no judgement call on what could happen next. Then, right in the center of the court a spike is driven straight into the ground on the opponent’s side and the match is finally over, only one team taking home the title.

For the crowd, a game like this is exciting and they only get to see it happen once, but to a player on the court, it’s just an average game day. These players spend everyday practicing and preparing for hours after school for every possible scenario.

Jenna Garrett, a senior at Batavia High School, experiences this schedule on a daily basis. She was a varsity player on the BHS team and also on the Sports Performance Volleyball Club team. For Garrett, practicing or playing in matches and tournaments has become a part of who she is and her life.

Garrett has been playing volleyball since she was in fourth grade and realized that she wanted to continue into college when she was 15. She has worked towards that goal and committed to play in college at Lindenwood University last March.  Her accomplishments and awards, such as First Team All-Conference and First Team All-Area, received can be attributed to her work on the court.

“She is very encouraging, intense, and a great teammate,” said Hannah Yaconis, fellow teammate and BHS senior who recently announced her intentions to play college volleyball at the University of Akron. “Jenna also always bring a sense of humor to court, and seems to lighten the mood.”

The BHS varsity team had a record of 22-14 during their 2017 season. Garrett had 81 sets, 56 kills, 250 digs, and 23 aces throughout her senior year on the team. In school history, she has the most accomplished digs and played as a back-row defender, setter, and server for the team. The BHS team worked together to have a season which included a win against Neuqua Valley on their senior night game, a team they had not beaten in five years.

Other big wins Garrett participated in throughout the season included making it to the championship match in three tournaments. Garrett was also named first Team All Conference in the Upstate Eight River along with Yaconis. The team also placed second in the Waubonsie Valley Tournament, Maine West Pumpkin Tournament, and the Jacobs Invite Tournament.

Her academic and athletic careers will be continued at the collegiate level this upcoming year. Playing in college means that there will be heightened expectations on training and the physicality of the sport. The time frame of months played is shorter for college seasons compared to a high school season which includes both the high school season and a club season. Training by playing for club teams can help players who plan on playing in college and playing on a club team has helped Garrett prepare for the commitment of playing in college.

“She has worked very hard and to have her education paid for by doing something she loves is a great opportunity,” said Lori TrippiPayne, the BHS volleyball varsity coach. “I knew that she would be good enough to play and do well in college.”

Garrett also received the Academic All-American nomination from PrepVolleyball.com. She was named to play for the Third Team of All-Americans. Nominees for this award have to be seniors, nominated by one of their high school or club coaches, hold a high grade point average, and be a notable player on their team.

Garrett has been on the varsity team as a starter for four years at BHS. Being on varsity since a freshman means that she has had four years of preparation for continuing into college and a commitment to the sport.

She has also shown leadership skills on the team since she has been a captain for three of her four years on varsity. Being a team captain since a sophomore means that Garrett has had to encourage and lead her team on and off the court.

“Every day is an opportunity to get better and I always try to take advantage of that,” Garrett said. “During games I really strive to lift my team up and be a positive source on the court and also maintain my composure when my team gets down.”

Garrett has also maintained high grades and involvement in other parts of student life at BHS while playing volleyball. She is the President of the Student Athletic Board which hosts the Athletes Against Hunger campaign. She is also a part of the National Honor Society and is an Illinois State Scholar.

As Garrett moves on to take her skills to the next level, her mark has been left throughout the volleyball program at BHS.

“She has been an excellent role model for the younger girls and has really shown them what it takes to play at the next level,” said Sarah Wilkie, a volleyball coach at BHS. “Our program is going to miss her greatly.”