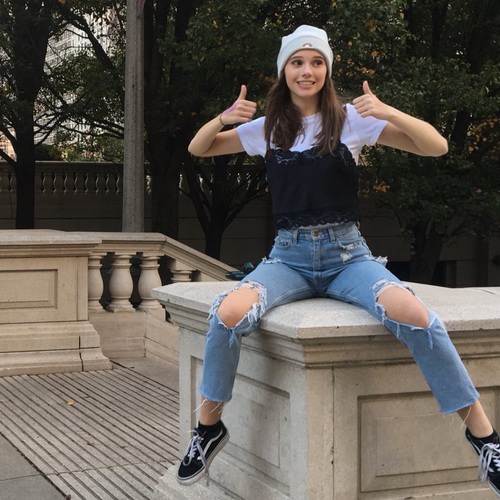 Inspiration from art and music rooted a new form of passion for Batavia High School student Maddy Radtke: Youtube. The platform Radtke uses to express with the world her love for music and the soul spark it resides within her. Radtke began her channel her freshman year and had a small fan base of 400 followers. As a senior, she now has 19,421 subscribers, 15.9k followers on Twitter, and 14.3K Instagram followers. Radtke has made a name for herself through her seven videos on Youtube displaying her personality and what she stands for as a human being. These videos include clips of her vacations, music reactions, challenges, and carpool karaoke.

“Maddy has inspired me to make a youtube one day,” said Hannah Tonn, one of Radtke’s friends.  “I think documenting your experiences or even talking about the things you love and having a mass of people admire that sounds amazing. Her videos where she’s traveled and edited those clips to perfection has inspired me to want to make artsy videos.”

When asked about Radtke’s personality behind the camera her friends have no problem saying she isn’t much different. Radtke loves to dance, sing, attend concerts, read, and discover new ways to portray her art. She shows this side of her through her videos and posts on social media. Her Youtube video “Harry Styles Album Reaction” displays her fun and goofy side as she shrieks over a band member and his new album release. The “CARPOOL KARAOKE” video on her channel expresses her fun and lovable side through dancing and singing with her friends and a cardboard cutout of Zayn. However, Radtke’s drive to show her fun and goofy side with the world didn’t come from anywhere. Radtke struggled with herself at one point looking for an outlet to regain her confidence.

Radtke began her Youtube channel as a response to her loneliness.

“I think the main thing that made me decide to start a youtube was the lack of friends I had,” Radtke said. “I found myself alone all the time and saw this super welcoming community online. Since I found myself having so much free time I one day thought ‘why not?’ As I continued to make videos and see that people were actually watching just made me continue to do it.”

Radtke, however, has more recently turned her publicity into a way to spread her art. Holding music close to her heart, she sets goals for herself small and large to obtain in the future and to share with her fans. Radtke’s enticement with music and graphic design is what is currently keeping her busy along with conveying herself through her fashion.

“Being a Pisces, my mind is constantly dreaming and thinking of the craziest things I could do in life,” Radtke said. “Some big goals of mine is to create album covers for a job. Being able to incorporate my passion for graphic design with my passion for music is something I know I would be so content doing.”

Smaller goals of Radtke include creating a podcast with her friend Annie, learning the basics of producing music, and taking a musical theatre class. While working on herself through her creations she is also paving stepping stones for others including as her boyfriend Kyle Kehe as she inspired them greatly.

“She is very passionate about things she enjoys and this carries over to the people she cares about as well,” Kehe said. “She goes out of her way to make sure her friends are okay and is always there for anyone who needs it no matter who you are.”

In order to maintain these goals that Radtke has set for herself, she has put away youtube for the moment to focus on graphic art. Radtke contains an angsty appeal that rubs off on her fashion and art and is the origin of her ideas. Her angst for the world began when she felt as if no one liked her. She wanted people to think she was bitter towards everyone and that she didn’t care in order to show that this loneliness didn’t affect her. According to Radtke, she put up a bitter front until she found friends that encouraged her to be herself. Now that Radtke feels more welcomed at Batavia High School she leaves her angst and rebellious behaviors for the art world.

“When it comes to rebelling I would also say in the art world,” said Isabel Walker, a friend of Radtke’s. “It is frowned upon by many people to go into an art-based career and we both get a lot of criticism for it. We rebel by going against peoples standards about what kids should and shouldn’t go to school for or get into in a way.”

As of for her fans, Radtke never expected to have the fan base she does.

“I remember two summers ago I went to three 5 Seconds of Summer concerts and at these, I met an insane amount of people. For one I went all the way to North Carolina and so many people came up to me saying they watched my videos and wanted a picture” Radtke said “I had this little crowd huddled around me just wanting to talk to me which was insane to me! Everyone I have met has been nothing but so nice to me and made me feel so happy. I will forever appreciate the constant support that people show me and I will forever be in awe that people truly support me.”

Through losing friends because of youtube due to them not accepting this side of her, finding herself within music and graphic design, finding true friends and exploding in her skin Radtke has made a name for herself, impacting many along her way including her friends who say she is kind, caring, and trustworthy.

“She also has a fun sense of humor and wit that makes everyone laugh,” Kehe said. Radtke looks forward to her future and things she has planned such as creating videos on her move into Columbia College Chicago and the first couple weeks there along with what’s to come with her graphic design art.