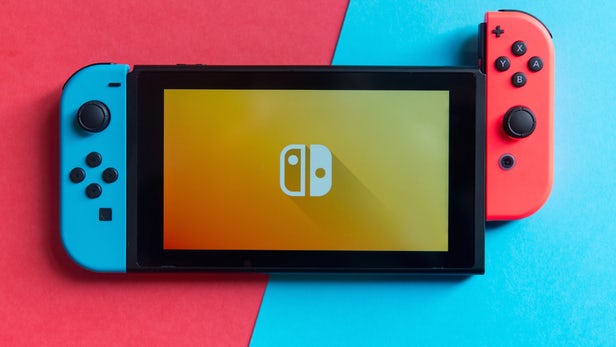 Like the Wii U GamePad before it, the Switch offers a 6.2-inch touchscreen. The tablet-like portion of the console is small and measures roughly 6.7×3.9x.6 inches. Even with the Joy-Con controllers attached, its 9.4×4.1×1-inch frame makes it significantly smaller than the GamePad. While the dimensions of the display are the same, the Switch’s screen looks far better. Its bright, glossy 1280x720p screen is gorgeous looking. Unlike the GamePad’s resistive touchscreen, the Switch uses a more responsive touch panel, which offers a higher contrast ratio and improved touch gestures. While users can certainly play the Switch outdoors, like with a typical smartphone or tablet screen, bright lights can make it harder for you to make out finer details on the panel.

It’s easy to attach the Joy-Cons to the Switch. They generate a very satisfying snap when they slide them in place. Removing them requires a little more care, however, as they need to be pressed down on a small button on the back of both controllers to release them. The left and right Joy-Cons are somewhat mirrored forms of each other.

Both controllers offer face/directional buttons and a joystick. Attached together, either with the included Grip accessory or on the Switch, they act as a singular controller with offset joysticks, similar to what you might see on an Xbox controller. The sticks themselves are pretty short, and can’t match the travel distance of Microsoft’s variants. They are much taller than the Nintendo DS’ sticks, however, and are serviceable. Both Joy-Cons support motion controls. In The Legend of Zelda: Breath of the Wild, they allow gamers to augment joystick aiming. The Switch is also more portable than expected. With the Joy-Cons attached, the device can fit into large pants pockets.

The Switch comes with 32GB of storage. That’s not a lot, but the console does support expandable memory via MicroSD cards up to 2 TB, though Nintendo recommends an Ultra High-Speed SD card to store games. For its battery, the Switch uses a rechargeable 4,310 mAh lithium-ion cell. This is a pretty sizable battery. Nintendo claims that the Switch can last over six hours, depending on usage. For Zelda, the company says users should expect around three hours of battery. Zelda’s demanding graphics use more battery than less graphically intense games.

As it is right now, the operating system is very simple and barebones. Currently, there is no video player. The only things it offers so far are just games.

Overall, the Switch has become one of the most sold consoles of all time with sales projects to be in the 10s of millions by the end of the next fiscal year. While the library of games isn’t anything write home about, the games it does offer have lots of content. I definitely would recommend this to anyone looking for a portable console that is powerful enough to be a home console at the same time.