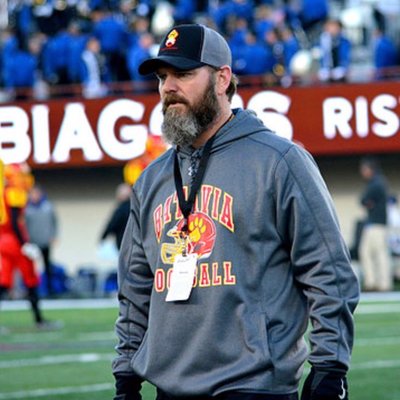 Matt Holm stands on the twisted, distorted face of the growling bulldog logo in the middle of Bulldog Stadium, wearing a baseball hat and a pair of black sunglasses. At his feet, laying down on the turf, forming a circle around him are over a hundred padded and helmet clad players from all three levels of Batavia football. They lie in wait for his famous weekly “Beautiful Day” speech, in which Holm takes a few minutes before practice to say a few words to his team about a variety of topics typically centered around personal ethics and goals.

Since he graduated from Batavia High School in the spring of 1987, Holm has forged a legacy for himself at the school, dating back to his days as a student when he was a member of the National Honors Society and a three-time team MVP, twice in football and once in baseball. As an adult, Holm has become one of the most influential coaches and teachers at the school according to his colleagues, which is part of the reason he was selected as part of a class of eight people making up the 2018 Batavia High School Hall of Honor Class.

“Having him as a coach and mentor has been a great experience as he has helped me become the person that I am today,” said Luke Weerts, a middle linebacker for the Bulldogs and one of Holm’s students. “You can can just tell how passionate he is for his job and how much he loves what he does.”

Holm’s journey at Batavia began in the fall of 1983 when he started his freshman year at the high school. Throughout his years at the school, Holm played linebacker for the Bulldogs as well as catcher for the baseball team. He also worked in the school’s maintenance department which was run by his father. Even after his years at Batavia, Holm continued the job through his college years.

“I know these halls and knicks and crannies better than anyone,” Holm said with a laugh.

His time at Batavia did not stop after high school, however, as Holm returned to the school as a coach and a teacher, winning two state titles as a defensive coach for the school’s football team, as well as serving as head coach for the baseball team until 2016.

“You see a football player as a football player, you see a teacher as a teacher,” Holm said. “I want to be seen as the football coach who was academic, someone who was just as passionate about history as I am about defensive sets and quarterbacks.”

The path to this honor wasn’t easy as Holm credits a lot of people, especially all his teachers and coaches, for helping him get to where he is today: an inductee in the Batavia Hall of Honor. Holm looked up to these people in his life, especially his coaches.

“Coach(Mike) Gaspari was another person who was really influential,” Holm said. “He came with me from the middle school over to the high school. I always wanted to be a coach, and Coach Gaspari was a perfect example of what a coach should be.”

Holm’s legacy is not just related to sports and school. He is also a extremely dedicated and devoted family man.

“He’s a great husband and father. I’ve always been impressed with how he and his wife interact with each other and their family,” said Dennis Piron, head coach of Batavia’s football and track teams and a 2016 Hall of Honor Inductee.

Holm takes his love for the family life outside of his own home as well, spreading the love to families all around Batavia with his annual holiday toy drive, in which he and the football team collect toys and other items for needy families. The past Christmas, the toy drive collected more than 500 toys for community members in need.

Whether he is building a dominating defense, helping kids achieve their goals in the classroom, or spreading love across town for the holidays, Holm always leaves a behind something in Batavia, according to those around him.

“He gives you what he expects from you. He expects 100 percent from coaches on the staff, students, his players, but he’s always going to give you 100 percent,” said William Colamatteo, a defensive backs coach for the football team.

That’s why, after so many years of hard work and loyalty to this school, Batavia High School is finally paying him back with a Hall of Honor induction.

“I felt like this was an outstanding decision for an alumni of our school, who has dedicated his whole life to this school and the people in it,” Piron said. “He’s a tough guy. He’s no nonsense. He’s a great competitor and he always has been. He’s a Bulldog.”