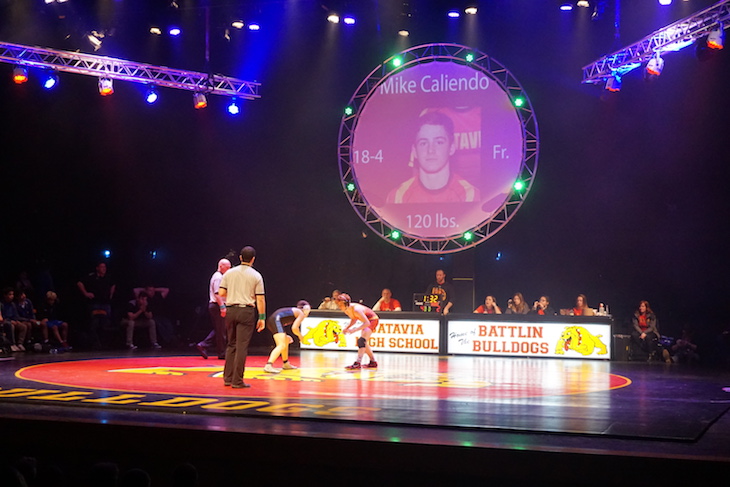 Freshman wrestler, Michael Caliendo, won the Springfield IWCOA Fresh/Soph state tournament on March 10 and 11. Caliendo, who wrestled in the 126 weight class, relied on his previous wrestling experience to assist in his victory. According to his coach, Caliendo has a bright future ahead of him in the sport of wrestling.

Caliendo had great success during the tournament outscoring his opponents 41-6, including one pin. Many of Caliendo’s matches were matches in which he had developed and maintained a large point lead over his opponent, such as in his first match, when he led his opponent 18 to 1. The only match that was close was Caliendo’s match to decide who won first or second place, which ended in a score of 6-5.

Success also came from his mentality during the tournament and the right mentality can shift the balance in a wrestler’s favor. Caliendo’s mentality was one of him just seeing the state tournament as, “just another tournament.” According to him, this allowed him to perform without pressure and to secure first place.

“He has been one of the most successful freshmen that we have had,” Bayer said of Caliendo, who became one of only four BHS freshmen to ever 30 matches his freshman year.

Though with his success, Caliendo has once again set his eyes on this goal and believes that Fresh/Soph state was not the end. Instead, as Caliendo puts it, it is “definitely a stepping stone to where I want to go.”

Caliendo is extremely committed towards his goal of wanting to place at IHSA next season. Coach Bayer believes that this goal that Caliendo has is achievable “if he continues to put in the hard work and develop himself in the offseason.”

Caliendo wants to use this success as a way to propel himself forward towards the goal and used the last tournament as the “next step towards IHSA.”