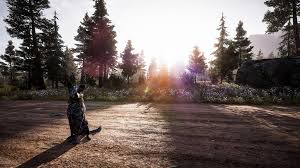 Far Cry 5 is the ninth installment in the Far Cry video game series and was a  highly anticipated game.

Far Cry 5 is the first Far Cry game based in the United States, which had American fans on the edge of their seats after hearing of the release. Far Cry 5 is based in Montana, and your character comes in as a sheriff’s deputy planning to arrest a cult leader. This backfires and now you’re stranded in the middle of a rural town, gaining help from citizens who haven’t joined the cult. Over time you reconnect with some of the characters from the original scene, but it takes time to do so. It is expected that an avid player is to spend 25 or more hours in game to complete the campaign, which doesn’t include side quests or events.

Far Cry 5 placed sixth on the 20 most anticipated games of 2018, landing above one of the largest accepted games of the year, God Of War. But it still falls behind Red Dead Redemption 2, a western-oriented game.

Far Cry 5 had a seven out of ten rating by Steam, an online gaming program, which was the same rating as the two Far Cry installments before this, Far Cry 4 and Far Cry Primal. Far Cry 3, however, was given a nine out of ten by Steam, but Far Cry 3 is highly regarded as the best installment to come of the Far Cry franchise.

I give Far Cry 5 a four of five. The game was enjoyable, the graphics were great (especially in 4k), and co-op has been a large part of this game. However, the game lacks structure. Your map can easily become clustered with missions, side-quests, and points of interest. You can be traveling to go do a mission when you notice someone needs to be saved on the side of the road, and become totally distracted from what your original goal was. The core focus of the game is killing and removing the cult from Fall’s End (the town where the game takes place), but you have unlimited control over what you want to do, making the game less of a mission-focused game, and more of a leisure-based game where you decide how you want to progress. Some players enjoy this approach, but others, like me, would rather a more strict storyline.