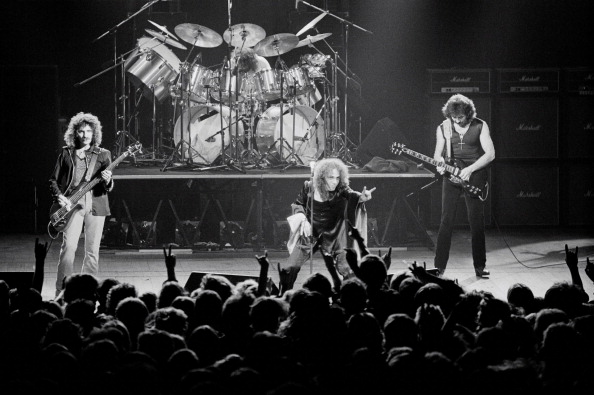 Rock and roll wouldn’t be anything close to what it is without the initial influence of blues and jazz ideas. Through artists like B.B. King and Chuck Berry, these roots soon developed into a new genre. This new form of music was seen as very bold and risky at the time. It became known as rock and roll, the ultimate music genre. It suits the interests of all people through its wide variety and makes it hard not to fall in love.

Grunge – Known for being the central 1990s rock genre, grunge is often considered a “hybrid” of punk rock and heavy metal ideals. The down tuning and deep distortion of guitars as well as raspy vocals give this genre an easily recognized sound. These artists had a goal to portray the “ugliness” in the world around them through dark lyrics and messy, deep instrumental tones. Bands of this genre include Pearl Jam, Nirvana, Soundgarden, Alice in Chains, and Stone Temple Pilots.

Blues rock – Though pretty much all rock music might as well be considered blues rock because of its roots, this genre emphasizes the blues characteristics in technique, structure, and rhythm. Typical twelve-bar blues patterns make this genre very recognizable. Extended “boogie jams” and blues-scale improvisation are key characteristics of this genre. Blues rock bands/artists include B.B. King, Eric Clapton, Stevie Ray Vaughan, The Doors, and The Yardbirds. The most famous modern blues rock bands are The Black Keys and The White Stripes.

Hair/glam metal – Glam metal is typically either hated or loved; there’s really no in between. This genre can be characterized as more of a “pop” take on heavy metal with punk influence mixed in. The most successful in the 1980s, glam metal was also interchangeable with the term “hair metal” because of the theme of big, wild, frizzy hair in the bands of this genre. Bands that represent this genre include Motley Crue, Bon Jovi, Ratt, Van Halen, Poison, Guns N’ Roses, Def Leppard, Skid Row, Quiet Riot, Twisted Sister, and Scorpions.

Hard rock – The hard rock genre has no clear definition. It is most often associated with the general ideas of “classic rock” itself. The British Invasion is what really sprung this genre. These techniques became famous in the 1970s and became America’s favorite music at that time. It’s very often associated with the popular electric guitar, the driving rhythm of the drums, and loud vocals. Blues roots were very recognizable and highly important to the making of this music. Some hard rock bands are Led Zeppelin, Deep Purple, Queen, Aerosmith, The Rolling Stones, and AC/DC.

Progressive rock/metal – Typically known as prog rock, this genre is the most known for straying away from basic rock ideals. Prog rock can be distinguished by a complicated instrumental aspect and complex time signatures as well as typically deep, emotional, and often fantasy lyrics. Albums of this genre are generally very long and have a consistent theme told as a story (Rush: 2112, Pink Floyd: The Wall). Prog metal (sometimes called “djent”) evolved from this, represented by bands including Dream Theater, Periphery, Tool, and Opeth. Some prog rock bands are Rush, Pink Floyd (the face of the psychedelic rock genre), Jethro Tull, King Crimson, and Yes.

Southern rock – Combining rock and roll ideals with country and blues, this genre developed in the southern states of America. The messages of these songs most often revolved around pride in their homeland, similar to country music. Southern rock is the most similar to the subgenre of blues rock, sharing nearly all of the same exact ideas with a southern twist. The faces of this genre are Lynyrd Skynyrd and ZZ Top. Other important bands are The Allman Brothers Band, The Marshall Tucker Band, Johnny Cash, and The Black Crowes.

Punk rock – Essentially popularized in the 1970s, punk bands rejected mainstream rock ideals in this time period. With fast-paced songs and radical stage presence, this genre was often associated with having an unmistakably wild sound. Lyrics were portrayed in a raspy, hoarse voice and were screamed more often than melodically sung. The messages of songs in this genre typically revolve around social and political issues. Bands include the Ramones, Sex Pistols, The Clash, Black Flag, and Misfits.