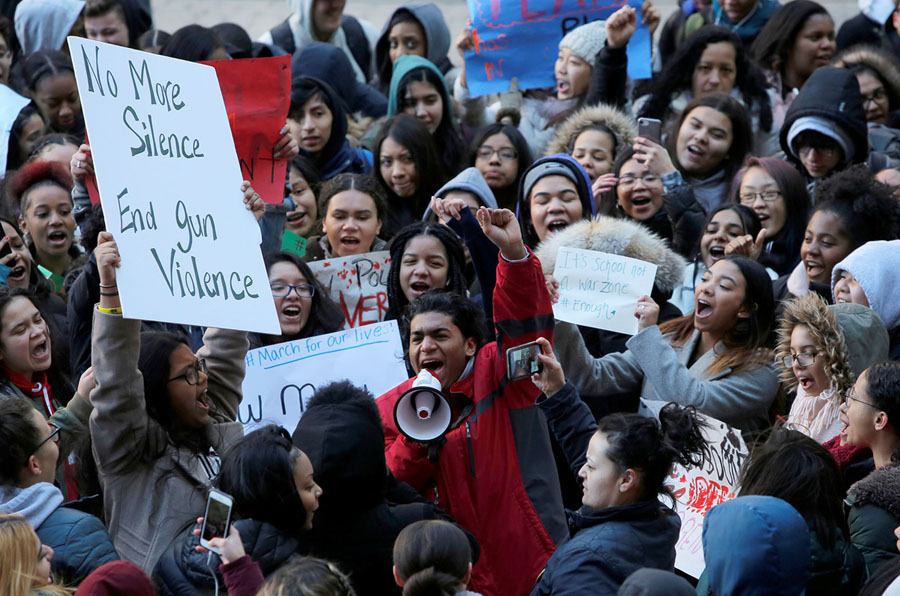 By Julianna Tassi and Joanna Garcia

Since the fatal shooting at Stoneman Douglas High School in Parkland, Fla. on Feb. 14, the students and staff of thousands of schools nationwide have been thinking about school shootings more than ever before and are turning to walkouts to freely voice their emotions against them. Batavia High School is one of these schools.

Many high school students have taken it upon themselves to respond to these shootings by voicing their opinions.

This has most often been seen through walking out of school to express their frustration.

“The walkout was partly a protest to push lawmakers to pass gun reform and partly a memorial to honor victims killed by firearms. Elementary, middle, and high schools and some colleges participated in the event, organized by Women’s March Youth Empower,” said Jen Kirby of Vox.

“Within the community of people who walked out, there is a lot of debate as to how far these (gun) laws should go,” said Batavia sophomore Julia Pelech. “But we all rally behind the fact that the laws we have right now just simply aren’t enough.”

There have been two of these organized walkouts occurring in high schools nationwide whether it’s to protest gun laws or to voice their anger of these deaths in schools. These were on Feb. 21 and March 14. Some schools also rallied on April 20, though Batavia did not participate in this because of the shortened school day.

The students made signs that they carried as they chanted. They said things like “protect children, not guns” and “fear has no place in school.”

Some schools chose to help produce alternatives to walkouts that enforce the same message and push to evoke change.

“Batavia High School students who leave class in protest may face consequences similar to those that result from unexcused absences, officials said… Batavia High staffers have offered to help students express their opinions in other ways, such as developing an action plan with administrators and helping them write letters to legislators during lunch periods March 14,” said Russell Lissau of the Daily Herald. Students of Batavia still walked out on this day in protest.

At many schools, teachers will allow it. The staff will exempt from class students who chose to protest.

“Other schools are sending the message to students that this is an important moment and students who want to have their voices heard should. The leadership of a local New Jersey school has told students, ‘we will hold the doors open for you,’” said Jeremy Knoll of We Are Teachers.

Some school districts encourage students to express their views but others rethink their approach on the walkouts, according to Marissa J. Lang of The Washington Post.

“We can all relate to these stories,” said high school student Maxwell Nardi of Richmond, Va. about the lives of those killed from school shootings. “These aren’t unheard-of people. These are things that we connect with — we all do band, we all participate in sports.”

They shout sayings pushing for safety in schools as well as for the changing of gun laws and to simply enforce that “enough is enough.”

On April 20, for example, 2,500 schools across the country walked out to protest gun violence. This date also marked the 19th anniversary of the Columbine High School shooting.

There have been twelve school shootings throughout the country since the one in Parkland and continue to anger as well as worry people.

Some students even protested in front of the White House because they thought walking out at school was not going to prompt enough change.

Many students have started websites to petition how easy it is to get ahold of a gun. A new bill was passed in Florida raising the minimum to buy a gun from age to 21 from 18. This shows that student walkouts have resulted in change to make things safer.