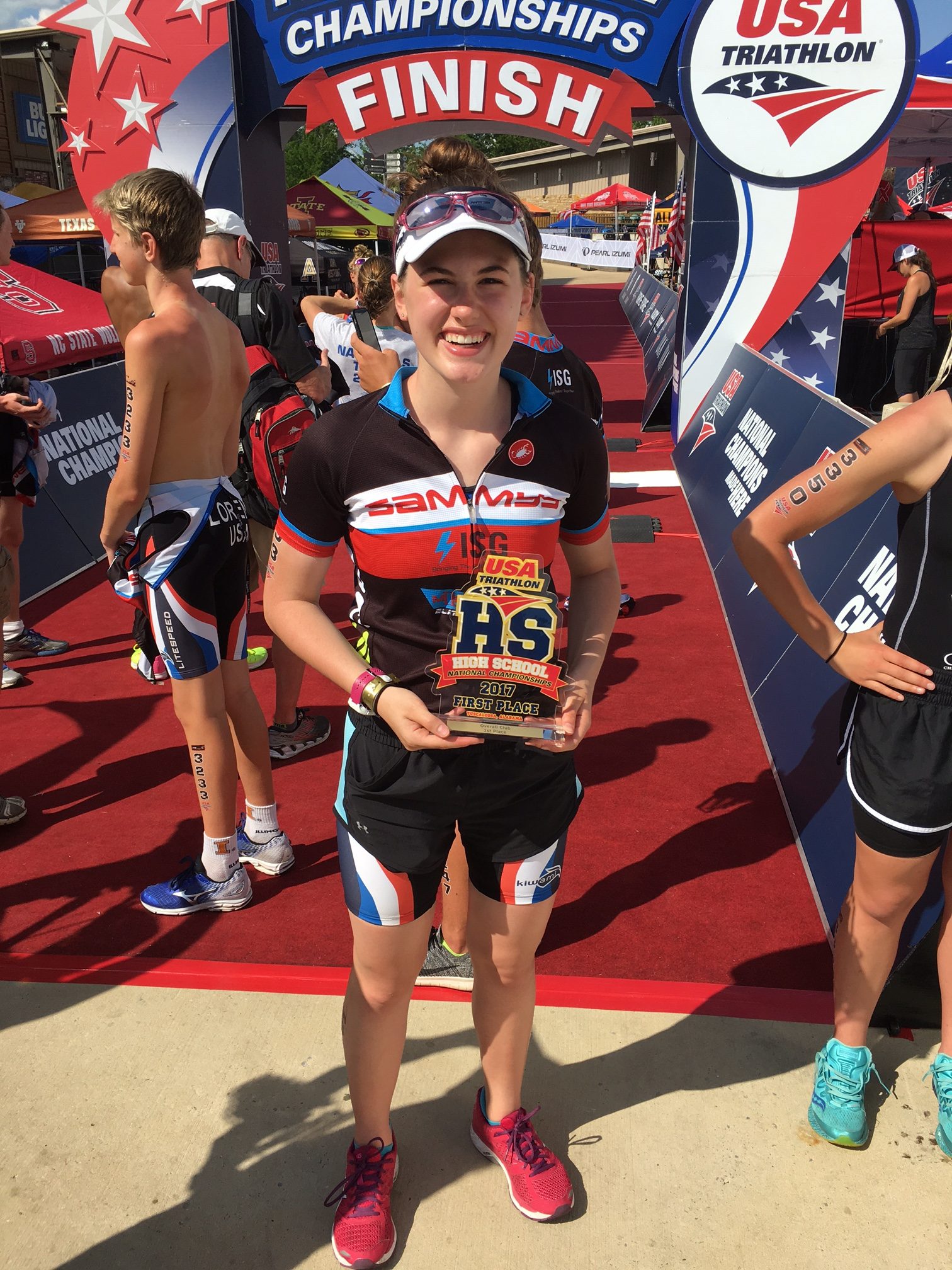 Imagine plunging into a freezing pool, lake, or river and then swimming almost a half mile. After that, you bike 12 miles along winding, uneven roads. All of this is followed by a grueling 5K run under a hot summer sun. These are the kinds of things associated with triathlons, and Morgan LaSalle lives for them.

LaSalle is a sophomore at Batavia High School and has been passionate about triathlons ever since she was little. It’s almost as if she was born to compete. It all started with her love for swimming, which ended up being her favorite leg of the three-part race.

“I was a swimmer for five years, but when I was eight years old I did my first kids tri at Lifetime Fitness,” LaSalle said. “I had no idea what I was doing. No idea. I had my Bratz bike from Walmart with streamers, but afterwards, I instantly fell in love with triathlons.”

LaSalle realized she had potential after completing several more races at Lifetime Fitness.

“Every year I went back and did the same race, but when I was ten I started placing and was getting second or third everytime. It was so awesome and I loved it,” she said.

After her “graduation” from the kids triathlon all those years back, LaSalle really started getting competitive towards the end of middle school.

“When I was in eighth grade,I was only swimming and didn’t want to swim anymore. I was getting bored of it, but I still wanted to incorporate swimming somehow and found that everything fell into place with triathlons. Now I race for MMTT,” LaSalle said.

MMTT stands for Multi-sport Madness Triathlons Team, which has athletes from all over the midwest. LaSalle has completed over 20 triathlons. Some of those were a part of the junior elite triathlons with MMTT.

LaSalle has been racing for the junior elite series for two years. It is a high performance group that hosts competitions across the country for athletes ages 16-19. Through MMTT, LaSalle has competed in states such as Washington, Virginia, Wisconsin, Alabama, and Ohio and she has gone to nationals twice.

Even though she travels far, LaSalle also competes in local events. She was a part of the West Chicago-Batavia varsity swim team her freshman and sophomore years. In addition to that, she has done the Batavia Triathlon.

LaSalle was optimistic about the close-to-home experience the Batavia Triathlon offered.

“ I raced the Batavia Tri for fun last June and it was so cool to be able to race in my hometown,” LaSalle said. “Last year I placed third overall and first in her age group. I’m going for the overall win this year.”

This summer in Batavia, while most teens will be relaxing and enjoying the warm weather, LaSalle will be training for yet another triathlon. LaSalle is excited to announce that the next race she will be participating in is a junior elite series race at Pleasant Prairie in Wisconsin on June 3 and the following weekend in the Batavia Triathlon on June 10.

But still, like most students, it will still be a relief for LaSalle when summer does come. When asked how she manages being an honor roll student and having 12 hours of training a week, she replied, “Honestly I don’t really know. There’s a lot of late nights and sometimes I’ll work out on my own so I can study for a test or do homework.”

Thankfully, LaSalle’s MMTT coaches are understanding of the challenges a student athlete faces each week.

“My coaches are very accomodating on what days I can or cannot be at practice,” she said. “They’ll send us workouts because there are kids from all over the Midwest.”

Looking back on all LaSalle’s accomplishments, there’s no doubt that she has had a successful career in and outside of the classroom. But what is it that makes her so successful?

LaSalle’s high school teacher, Miss Savitski, said that “Morgan is an outstanding student athlete. Morgan continues to strive for excellence within the classroom and in preparation for her events. Her compassion towards others is evident in each task she does. Morgan is a role model student and athlete that I am lucky to know!”

Even with managing schoolwork, training, and a social life, LaSalle wouldn’t have it any other way. She continues to love triathlons more and more after each one she completes, no matter how exhausting or stressful.

LaSalle said her favorite part about triathlons is the community.

“Everyone is so supportive. The feeling I get after a race is also the best part. I always want to do another one and do better, build off how I did. It’s a constant feeling of wanting to strive for more. Triathlons really push you to be your best self.”