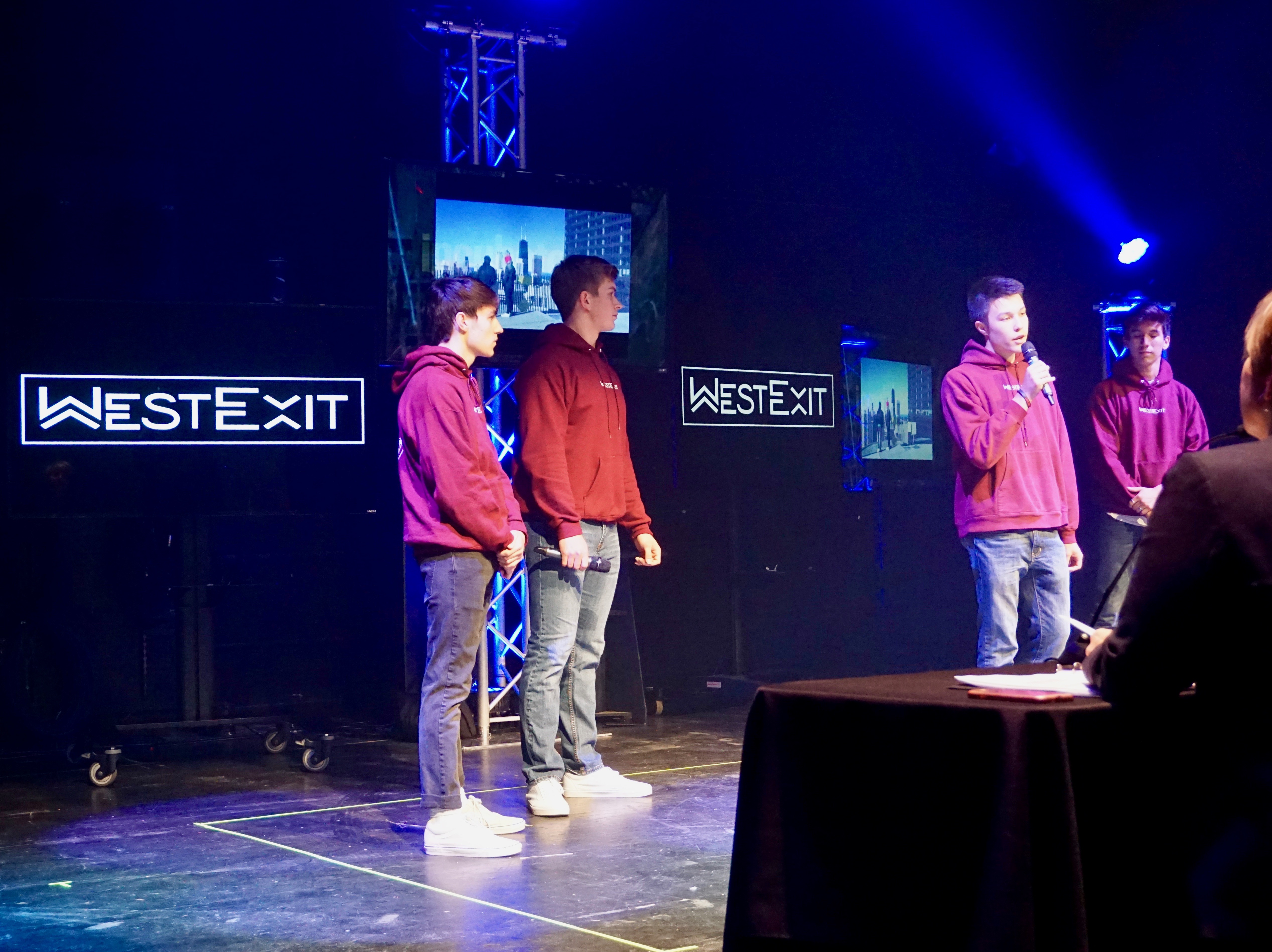 Batavia High School juniors and seniors presented on the Batavia Fine Arts Centre stage on Wed., May 16 for Pitch Night, a Shark Tank-style competition where groups of four or five students present their products to judges to try and persuade them into giving them the money they need to further their product. Batavia is one of around 90 schools throughout the country to participate in INCubator, a year-long class that prepared them for presentations

“It went very well,” said Dennis Piron, the classroom instructor for the program. ”I was really happy with the teams and rewards. I also thought it was awesome that the teams were well prepared and they did an outstanding job. I was very impressed by the quality of all the performances that night and grateful for the crew that helped out and the audience that came. I think our school is the best school to do pitch night because of the beauty within the performance.”

Hyra Parking by Drew Iutzwig, Adrian Osborne, Jake Paoletti and Thomas Prosser was given $2,000 for their website and app that allows a high schooler with their google account to rent out their parking spot for however many days they’d like. The owner of the parking space would get a portion of how much they sell it for. Hyra parking also wants to be able to do after-school activities like football games and other events. Throughout the year, Hyra Parking went to four schools and spoke on the phone with five others to try and see if the schools would allow them to expand their company out of Batavia. They also said they would work with hall monitors and faculty to make sure they are aware of Hyra parking.

West Exit, a clothing company made up of Connor Davis, Julian Davis, Michael Jansey and Joe Ruzicka, was given $1,800. The group started the company themselves eight months ago in February 2017. Since then they have put their merchandise on Reddit where it has received over 7,000 views and made more than $3,500. They also have donated and volunteered to the United Way. The group’s idea was generated from other companies like Supreme. They sell American-made hats, beanies, t-shirts, and hoodies all priced from $20-$40.

The Sunshine Seat by Alain Ceija, Quinlan Hagen, Matt Sutherland and Daniel Sterne was awarded $1,700. It is a car seat designed to alert a parent if a child is left in the seat and the temperature reaches a certain degree. It has a built-in thermometer linked to a phone-based app. The car seat sells for $79.99 and the app costs $7.99. There are discounts available if the customer wants to buy more than one. The group thought of the idea when one of their neighbors was talking about how they had mistakenly forgotten their child in the car on a hot, sunny day.

“I never understood how this was possible before it happened to me. My husband thought I grabbed her- I thought he grabbed her. Twenty-five minutes went by on July 4 with the full sun on our car. Thank god the windows were cracked. We were so busy getting our other children inside and settled…It was that fast. I still get sick to my stomach thinking about it. We were so lucky,” the neighbor who has nearly lost their child said.

GeoFluence, a social media advertising company created by John Coyle, William Fitch, Steven Mansour and Benjamin Schieber, was given $1,400. They pay hired influencers, people with large amounts of followers on social media, to post about a business to try and give them more publicity. Participating businesses then pay GeoFluence to post positively about their business. The group wants to get the word out about GeoFluence by driving people to their website and going door to door looking for smaller business who they could help.

“I think overall it went really well,” Mansour said. “I was really excited to see all the groups present for their final presentation.”

The fifth and final group, Osa Security, created by Julia Bartolotta, Blake Carlson, Colin Richter and Ryan Stark, was given $1,000. It is an app that was made to help prevent sexual assault on college campuses and is directed toward females in their 20s. The app is made to prevent a situation before it happens and allows the user and their friends to group up so their friends can easily find their friend’s location. If they are in need of help they can then communicate to them via text or FaceTime. They are planning to work with colleges to get their name out and work with campus security.

They would like to move into cities working with local law enforcement. The app is also very easy to use; all it requires is to make an account and then that allows access to the application’s map so it can show where they are to their friends.

Overall, Piron thought that Pitch Night was a success.

“I believe all the performances continue to improve every single year,” Piron said. “The teams have raised the bar and when more kids get in the program it means more teams competing.”