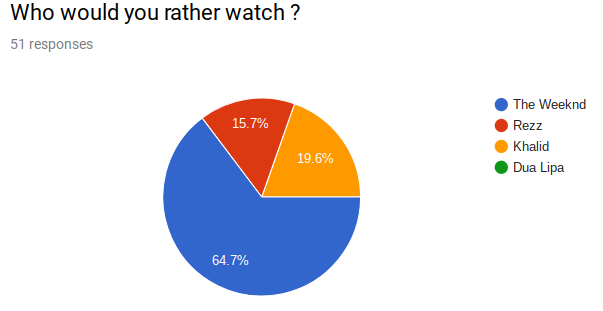 The excitement running through your body as your in line is surreal. The security line seems so long, everyone is looking at each other admiring each other’s creative outfits.  Girls have different colored glitter falling down their hair, the different hairstyles are endless. After standing in line for what seems like forever everyone runs to the different merchandise booths. Some people are running to different stages to see their favorite artist perform. The lines to get food are so long but the smell of the chicken fingers attracts many hungry and tired people. The lines to refill water bottles are even longer. The heat feels unbearable and makes everyone sticky. By the end of the night, everyone’s feet are aching but that doesn’t matter because the memories that were made are never going to be forgotten. The train ride back home is quiet because everyone is exhausted and the thought of being in your own bed makes you content.

Lollapalooza is an annual music festival that features electronic music,  alternative rock, and hip-hop. Lolla was founded by Jane’s Addiction vocalist, Perry Farrell. This festival usually runs at the beginning of August. This year it goes from Aug. 2-5 in Chicago at Grant Park. The popular festival temporarily ended in 1997 because of low sale on tickets, but was later revived in 2003. Many people from all over the world travel to Chicago to attend Lolla: around 100,000 people attend in just one day.

Ticket prices vary based on the day. The lowest price on the website is a ticket for Thursday; general admission costs $120 not including taxes and fees. General admission tickets for Friday, Saturday, and the four-day ticket package is sold out. On the official Lolla website, there is a Layaway plan. The four day VIP ticket is $2,200. If you get the layaway plan the first fee is $306.61 and the rest is paid in small payments. The VIP package includes unlimited in and out privileges which you can’t do with general admission. Also, golf cart shuttle transportation between north and south lounges are provided. Many people look forward to the elevated platforms which provide a better view of the stages. Lollapalooza tickets are sold out even before the line-up is released, which means people buy the tickets without even knowing which artists are going to be there.

Many people argue that Lolla is overhyped and overpriced but others countdown the days for Lolla weekend. “I had a negative experience at Lolla because it was way too crowded and couldn’t even see 21 Savage,” said Frank Cintula. At music festivals, crowds get really big and everyone starts pushing and throwing stuff which distracts you from the artist. “Everyone was pushing to get to the front, so I couldn’t even see Russ,” said Maria Gonzales. But some people think Lolla is one of the best parts of summer and a great way to make memories.”The view of the city while you’re listening to your favorite singer and moving to beats is what gets me everytime,” said Chelse Barona.

No one can tell you how to do Lolla the right way because everyone is going to be in different situations. Some ways to make it better would be to take advantage of the rule that allows people to bring two sealed water bottles. There is a spot where you can refill water bottles for free. With all the walking, dancing and the heat  water is a necessity. “I didn’t like the food it was overpriced, but I did like that I could refill my water bottle,” Gonzales said. Eating breakfast before Lolla is important because most likely it’s going to be a long, crazy day.

“It’s not only just a concert but a movement that the music industry has created. It’s definitely different every year and it just gets better,” Barona said. This annual festival has been recognized all over the world because of the unique experience that people have. Everyone has their own opinion on whether or not Lollapalooza is worth it, but you won’t know if it is until you go and experience it.