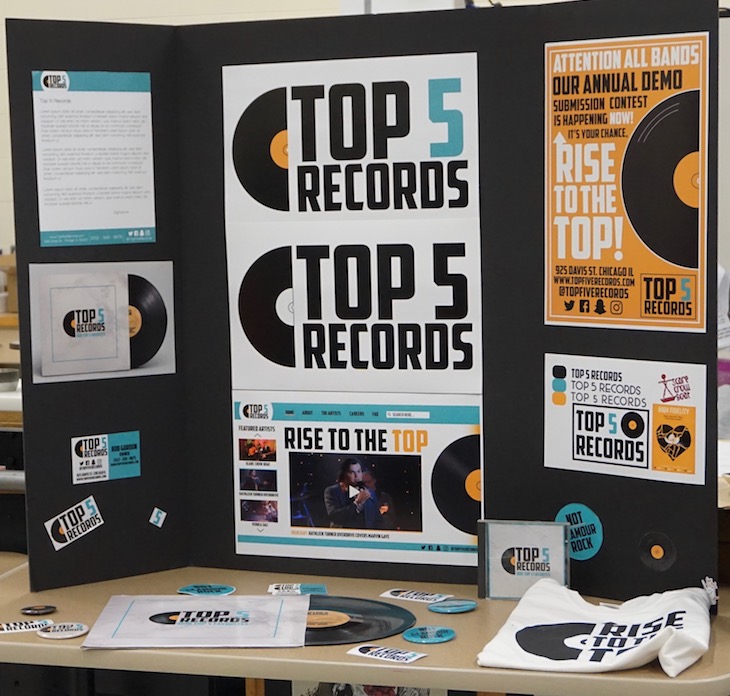 For this year design challenge, the contestants were asked to create a logo, business card, letterhead, website home page, promotional poster, stickers, apparel, and any other merch that they could come up with. The contestants had to go through there work with the panel of 10 judges.

Mrs.Tieri Ton noticed how Haley seemed professional while presenting her work to the panel of judges, “the judges really saw the professionalism and the effort that she put into it.” She continued saying, “They were also really taken by her sincere and positive personality.”

Right next to Haley was her Graphics teacher Mrs.Tieri Ton, who has helped Haley with going to her next level, as well helping Haley to push herself further. Haley shows Mrs.Tieri Ton her process which adds to going with the next level.

When interviewed about how she felt having to present to the judges she had this to say: “…I could feel myself shaking but you have to push through it because that’s what they’re looking for” she said. “And I knew what I was doing..” she continued saying.

The schools that entered the competition this year which included Batavia High School were: Oswego East High Schools, Oswego High School, Indian Valley Vocational Center, and Fox valley Career Center. But only one student from each of the Valley Education for Employment area schools would present their interpretation of the design challenge.

When asked about the process Haley said that: “[There] was a classroom and it was all of the teachers from the other schools..I just stood up with my..tri fold board and I..went over everything with them.”

Haley Graphics teacher Mrs.T or Mrs.Tieri Ton had this to say about Haley work: “All of the students’ work for the area schools was strong, but the judges really saw the professionalism..” She continuing saying “..and the effort that she put into it.”

Haley first began to design her family company logo. Which came in handy for the competition. Since a requirement was to create a logo. When ask which part of this entire process was the easiest Haley responded with: I could knock out the logo right way and from there it’s just like finding specific things that [were] used in the logo to incorporate in other [areas].” She continued with saying, “..Sort of rap everything in with each other..”

It is clear to see that Mrs.Tieri Ton is very proud over the accomplishment of Haley winning the Valley Education for Employment System’s 2018 Graphic Student of the Year.

Thanks to Haley and Mrs.Tieri Ton for answering these question and we wish the best for this year VALEES 2018 Graphic Student of the Year,Haley Stein!