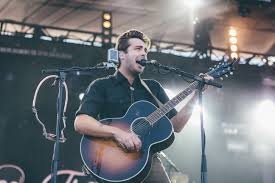 The band Lord Huron has recently become a staple in the indie movement. Their newest and third album, Vide Noir came out on April 20, 2018. Lord Huron consists of members Ben Schneider on guitar and vocals, Mark Barry on percussion, Miguel Briseño on keyboard and bass, and Tom Renaud on guitar and vocals. Lyricist and frontman Ben Schneider originates from Michigan and moved to Los Angeles to start a career in music. Influences of Schneider’s past can be heard in the music of all of their albums.

Vide Noir differs heavily from the band’s previous works. Translated from French into, black void, it might explain some of the many abstract elements of the album. Lord Huron’s first two albums, Lonesome Dreams and Strange Trails were both heavily directed by traditional folk music. They included gentle strumming guitars and a mesmerizing vocalist. While all of the songs did have indie elements, such as “The Night We Met” and “The Ends of the Earth” anyone would clearly be able to hear the prominence of folk. Vide Noir, on the other hand, is not as easy to pigeonhole as the other members of the band’s discography. In my opinion, the album cannot be categorized into a genre.

The song “Ancient Names pt. I” has a definite indie sound, but “Ancient Names pt. II” has the feeling of a garage rock band. One would think that, because they’re parts one and two, the second would be a continuation of the first, but this is when Lord Huron starts playing around with typical musical traditions. Many of the songs on this album are not organized like most music. Most other songs always follow a pattern: verse, bridge, chorus, repeat, or a variation on that. Vide Noir’s songs rarely abide by these standards.

Lord Huron has avoided the curse of many indie folk bands: starting unique and then ending up as pop music to impress studio executives. Lord Huron has done virtually the opposite; the first two albums were straightforward indie-folk albums. Alternatively, Vide Noir is much more abstract and avant-garde. Songs like “Back From the Edge” and “Moonbeam” being combinations of everything from punk rock to sampling from 50’s radio ads, it doesn’t seem like the band is trying to impress any businessman with their music.

Vide Noir is a great attempt by a band trying to make music outside of the box, and it was a major success. Maybe there were less Michigan folk influences, but everything from the theremin solos, to the odd samples, seemed to fit perfectly. And while there was no definite theme, perhaps the lack of theme and strange rhythms and melodies is in fact, a theme. I am very certain that Lord Huron can keep expanding their musical horizons, and I look forward to seeing what is in store for the future.