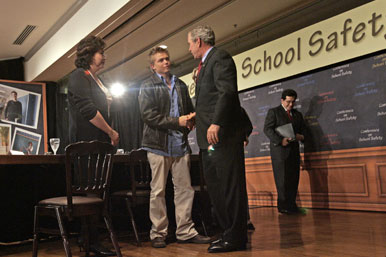 When thinking about the biggest concern in school safety today, a certain controversial topic comes to mind. School shootings. According to ScienceDaily, studies have shown that more people have been injured or killed in mass school shootings in the US in the past 18 years than the entire 20th century. With a rapid increase in these tragedies, I believe that a solution to end these attacks would be equipping teachers with firearms.

Students are becoming more aware of the shootings taking place through the news or different social media outlets. When I asked Batavia High School Junior, Eliana Warren, why she thinks arming teachers has been such a major topic in the news lately she replied, “Because of all of the school shootings recently. Everyone’s trying to decide if having a gun in the classroom is a good idea, and how it’ll affect the situation if we were to have an active shooter.”

Many students are afraid of having more firearms in the building because they believed that it may actually increase the risk of a school shooting. Fox News stated that a social studies teacher in Georgia fired his handgun inside his classroom. This has caused many people to believe that no teachers are able to handle a firearm, but there has been cases where having a gun has stopped a shooting from worsening. According to an article posted in December 2007 by The Denver Channel, a gunman opened fire outside of the New Life Church in Colorado springs. A church security guard shot and killed the gunman, putting an end to his attack.

Many different schools across the country are already taking action in this process. Fox News released an article in February explaining that a school board in Kentucky has approved a proposal that would allow teachers to carry concealed weapons. With these new advances, certain precautions should be put into place in order to have firearms accessible to faculty. The New York Times stated that a rural Ohio district outside of Dayton placed gun safes in their school, tucked away only accessible to designated staff members whose fingerprint can open the safe. If guns could only be accessed by trained teachers in a time of emergency, I believe this would help students feel more comfortable in an environment with firearms.

Students rely on teachers to make them feel safe. With an increasing rate of these violent attacks students need to know that teachers are prepared for the worst. Through proper training and safety precautions, arming teachers and other faculty is the best way to prepare ourselves if we were to be involved in an active shooter situation.